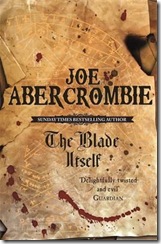 I know, I am behind the times on this one.  In my defence I did buy it a year ago according to my Goodreads profile (surely it can’t have been that long ago).

The covers kept luring me and the fine fellow just seemed to be producing more and more books.  Rowena Cory Daniells dropped the hint a couple of times (and long term readers know how much of a fan I am of her work) that he was good.

And yet as often happens, books that I really want to read, books that I buy, languish in the “to be read after review copy” pile for.. ehem twelve months.

Why now?  I will be interviewing Joe on Wednesday and due to a courier mix-up( a story worthy of its own post) I wasn’t sure that I would receive his latest, Red Country in time ( I have).  So it was “pull my finger out and start reading time” as of Friday in the hope that all would be as Rowena and the many Abercrombie fans had suggested.

The Blade Itself is book one of the First Law Series.  We are introduced to two central protagonists of dubious moral quality.  Logan Ninefingers is a Northman, down on his luck, cut off from his band of morally dubious named men.  At the beginning of the story he’s ambushed by the Shanka ( Abercrombie’s version of Orcs ?) or to use the more endearing tem, Flatheads.  Sore and sorry for himself he wanders near death until he converses with spirits and they send him south to meet the First of the Magi, who is looking for him.

The other protagonist (and I say protagonist because they don’t appear to be directly opposed) is Sand Dan Glokta, an Inquisitor and former war hero, tortured and now crippled.

Both are cynical, war weary and world weary men.  Abercrombie does a superlative job of making a killer and a torturer, witty and loveable characters.

Several wars are looming, with the Northmen under King Bethod and the Ghurkish Emperor to the South.  The Guild of Mercers and the Bankers seem to be be embroiled in shady dealings.  The King of the Union (the home team in the book) is led by a corpulent, drooling idiot of a King and undermined by political factions. The peasants are getting airs and the nobility are getting noses put out of joint.

There’s a quest and a wizard - only the beneficiaries of said quest think the wizard is a charlatan. In essence, it’s a very modern tale.  Or a rather modern cynical approach to the fantasy genre.  It ends on a cliff hanger and it lacked a bit of resolution for me but the witty banter, the dark humour expressed by our two protagonists carries the tale.

It’s not your grandfather’s tale of glowing elves and rings that need dropping into volcanoes.  It’s very gritty, very violent and darkly humorous. I am intrigued to see what Abercrombie does with some of the common fantasy tropes ( I have heard rumours).

Women in the book are light on – were have an escaped slave with a very short temper who we assume “bad things” have happened to and a secondary character whose the victim of physical abuse at the hands of her father.  I hope that we get a female character in book 2 or 3 that isn’t strong because she’s had to survive sexual or physical abuse.  I think there’s plenty of ways you could introduce a strong woman without resorting to that trope.

The Blade Itself is a counterbalance to the idealistic fantasy you get from the heirs of Tolkien.  It’s very much like A song of Ice and Fire in tone and content only shorter  and complete.

Some have called it Nihilistic, I’d say realistic.