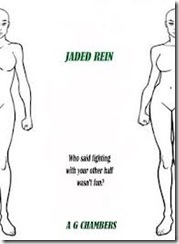 I, unfortunately, can’t agree with them. It’s been the hardest review I have had to write in recent times because I fell like I am criticising a neophyte writer. Someone who should have been guided by an experienced editor or some writers group colleagues.

Jaded Rein feels like a manuscript that still needs workshopping.  I believe it has been independently edited, and for the most part it’s a fairly clean document i.e. no glaring typographical errors. I guess it depends what you are paying an editor for though. I noted spelling errors and the words seized used instead of ceased, weary instead of wary, before I gagged my inner editor.

But that’s not the major irritation.  There was a preponderance of purple prose, overwrought similes, and sentences that verged on not making sense.  I feel as if any half decent editor would have sat Chambers down and queried what she was actually trying to say, and got her to refine the writing. For example:

“Everyone in the government is aware of its collapse although nothing official has been stated, written or verbal.” The Prime Minister was the epitome of political.

Chambers is a neophyte writer and it unfortunately shows in this work.

A romance in sci-fi/thriller trapping

In a world where Doppelgangers roam freely with their human counterparts a new war has begun; finding the scammers in a condition barely in its infancy. The government can't tackle what they do not know how to handle - and that's where Jade's team comes in.Made up of DP's with different replicating abilities, Jade's team seeks to quietly dispose of what the government's made a mess of.

But this time there are stakes involved. Tasked with the contract of taking down an Intel DP cult that has taken Stratford as hostage, Jade must put aside her personal feelings and recruit Rein - the most cunning Intel on the scale - in order to get the job done.

The focus of the book is on the emotional interplay between the characters, Jade and Rein in particular. To claim as one reader did, that the book was a must read for science fiction fans, makes me think they aren’t one.

The setting is futuristic, but aside from the world building around the concept of DP’s(essentially people with psychic abilities – characterised as an entity that exists outside of your own body) it’s a very vaguely sketched future. There’s a Prime Minister and a town called Stratford and that’s about as much information as you get on setting. There’s no flavour to the world beyond the rather inventive use of food smells to describe emotional states.

It lacks the thriller pace, chiefly due to it being exposition heavy. There is also the sense that Chambers doesn’t have a clear understanding of the tropes used in thrillers and military/spy fiction and the expectations of a thriller reader. Then again maybe the label thriller, isn’t one of her choosing.

There’s a scene where Jade uses a Derringer to shoot out a security camera the size of a penny.  A modicum of research on the weapon will tell you why this is stretches my suspension of disbelief to breaking point.  I suspect though that the derringer might have been an article to give the character some flavour.

As a romance I found the tension to be obvious and forced. The characters are emotionally immature and again not what you would expect from experienced and battle weary operatives.  I felt as if I was being bludgeoned with descriptions of how the characters were holding themselves back from one another, some subtlety, some uncertainty, wouldn’t have gone astray here.

I commend anyone who finishes a manuscript and seeks to publish it, writing fiction is not as easy as some seem to think it is. I think publishing Jaded Rein was, however, a premature move on Chambers part. It could have been a much better book-the core idea is reasonably sound but the execution is this case is lacking.