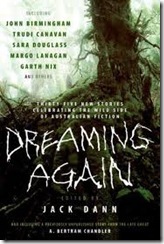 I managed to borrow Dreaming Again Edited by Jack Dann through interlibrary loan.

I probably won’t get through all the stories before I have to return it but just wanted to say that I am somewhat blown away by the collection.  I have just been randomly dipping into stories before I go to bed of a night and I can’t say I have come across a story that I have felt “Meh!” about.

The collection was published in 2008 and was  a follow up to the earlier (and now hard to find) Dreaming Down Under duology that received critical acclaim.

I will be hunting for the book in Brisbane when I travel up for Supanova, so if any readers know of good second hand stores in Brisbane that specialise in Speculative fiction, let me know.

(Edit: As I was checking out the amazon links for the books mentioned above I noticed that Amazon have slashed the price on Dreaming Again – picked it up for $13.00 Aud delivered – click here to purchase)

Nightship by Kim Westwood – On the recommendation of Ian Mond from Writer and the Critic.  A bleak future Australia, with some interesting twists on culture and gender.

The Last Great House of Isla Tortuga by Peter M. Ball – Gothic horror meets Pirates of the Caribbean.  While I am a fan of Peter’s Twelfth Planet Press releases, the writing in this short blew me out of the water.

The Jacaranda Wife by Angela Slatter - An Australian fairy tale.  It’s Australian colonial with echoes of the myths and legends of the old country.

The Fifth Star in the Southern Cross by Margo Lanagan – Just started this one and like most Lanagan short stories, it’s disturbing me (but in a good way).