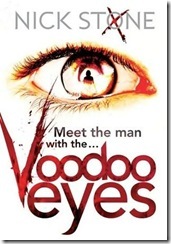 Voodoo Eyes. by Nick Stone is the third Max Mingus novel.  While the story ties in with the previous two books this one worked really well as a standalone.

Miami Noir
I have seen Voodoo Eyes advertised as a thriller - it certainly has some thriller pacing but I really enjoyed the “Miami Noir” feel that the book had about it.  No doubt Max Mingus’ role is a private eye shaped the tone of the novel in this regard.

There’s something about setting the novel in Miami, with the heat and humidity, the natural fetid decomposition that occurs in a tropical locale mirrored by human corruption and decay we see in popular culture depictions(I’m thinking Dexter here). Indeed a central theme of the book is corruption an both a personal and organisational level.

Upping the ante
While Voodoo Eyes begins as Miami Noir, Stone is able to direct the story toward standard high stakes thriller territory by shifting the action to Cuba where our protagonist Max crosses paths, with Cuban secret service, retired Black Panther activists, Drug Cartels and the Department of Homeland Security.   Stone does an excellent job of putting Mingus in harms way continually and upping the ante.

Not an entirely smooth transition
Initially I found the “hardboiled” descriptions a little long for a thriller.  The text was evocative and certainly grounded the reader but I felt tighter writing would have delivered the same effect without the loss of pace I experienced. This was a small hurdle though (possibly just a quirk of Stone’s style) and by the time I had settled into the meat of the novel it annoyed me less.

If you like the look and feel of Dexter, the grittiness and double dealing in films like The Departed you’ll find Nick Stone an enjoyable read.

This book was provided to me by the publisher.
Did you enjoy this review? Would you like to read more? You can subscribe to the blog through a reader,by Email or Follow me on twitter.
Posted by Sean Wright at 10:58 AM