To SMOF or not 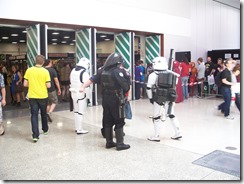 Paul Cornell has just given a rather good apology for his comedy speech on SMOFS and Smurfs.  I didn’t hear the speech as… well..Ustream+ 3G internet.  But he offended some folks who consider themselves SMOFs (Secret Masters of Fandom or Con runners/Organisers) but  he managed to do what many people can’t do these days – offer a sincere apology for that offense.

The post got me thinking though and I have decided to post my thoughts here rather than on Paul’s post because his is an apology and doesn’t really need additional commentary.

The question I ask myself is whether of not SMOF or smof is something that the SpecFic community should continue to embrace as a term.  For the origin of the term you can check out the wikipedia page here.

Now I ask myself – If a community wants to be open and inviting, is requiring some special understanding some extra layer of sub culture language appropriate.  In-jokes are fine for those who are in but I’d argue they present a barrier to those coming to the community from the outside.

The term covers a multitude of roles, organiser, fan, valued community member.  Indeed I hadn’t heard of it until I had been commenting on the genre for a good 2 years.  What started as an endearing, self referential term that bolstered community seems to have outlived its usefulness.  Or has it?  Is it worth hanging on to the term out of deference to its place as part of the development of fan convention running or is it time to consign it to history?

I guess I am a fan of recognising those who contribute to the community in an open, easily understood way, for the benefit of  new fans.  I also wonder if this is a something particular to Northern Hemisphere cons.  Because its only in reference to American and UK cons that I have heard the term or… perhaps I am still on the outer? 80