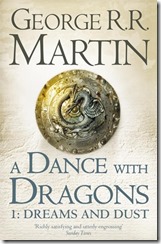 I have been reading the book series in conjunction with the HBO series, reading ahead when the itch to know what has happened to our favourite characters has become too irritating. Perhaps it’s because I am all caught up and thinking about the series that my thinking is drawn to how episodic this particular tome (tomes if you read the split version) is.  I do feel, more so in this book than any other in the entire series, that things are being drawn out like an episodic TV show. The writing is as good as ever and when Jon Snow, Tyrion and Arya are the focus I attain immersion in the text.

The first half of the novel (Book 1) suffered most I think from the effects on too many points of view with not moving the plot forward.  The second half (Book 2) I felt moved as closer to a resolution, but then left us hanging on the sides of several cliffs.

Still none of my favourite characters died and if that was the only resolution we were going to get I might just let Martin get away with it.  I think if I had paid for the books instead of borrowing them from the library I might have felt a bit cheated or perhaps milked.  If Martin were to release another book in the series without some more focussed momentum towards a conclusion I might give the series away and just watch the show.

Then again, when Martin writes those characters I love, places them in tightly written chapters I am just as likely to foreswear everything I have written above.

Another author and reviewer, Ben Peek, has some interesting things to say the complement the above.

In short my feelings are that A Dance with Dragons was compelling enough to keep me reading, but overall I was left feeling unsatisfied, yearning for some resolution.