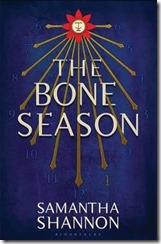 The Bone Season is Samantha Shannon’s debut novel, one of a planned seven to be rolled out by Bloomsbury. It launches today with much fanfare, and a push from Bloomsbury to be the next Twilight or Hunger games. Imaginarium Studios have obtained the film rights, so it seems there’s a considerable effort being put behind Ms Shannon.

The Bone Season is an alternate history dystopia that has that wonderful gloomy English tone.  An oppressive and moralistic government with religious trappings (the reader assumes it’s Christian) attempts to track down and imprison rogue or free Voyants (any number of different types of people who can manipulate/talk to spirits).  Various criminal syndicates exploit these free voyants while keeping them out of the government’s way.

Our protagonist Paige Mahoney, an Irish immigrant, is working for one of these syndicates until she is captured and taken to the government's holding facility. There begins an unravelling of the truth, the real workings behind the curtain the state has erected.

Imagine Orwell’s 1984, cut with some of the dark fantasy from Storm Constantine’s Stalking Tender Prey but without the sex and you come close.

I wanted to like The Bone Season with as much vigour as Andy Serkis, who blurbs the back of my paperback copy calling it, “Truly Extraordinary and Thrilling”.  I prefer my dark fantasy to have that gloomy, cynical edge that British writers seem to evoke naturally and I do love a good gritty dystopia. Sadly I didn’t find it thrilling or extraordinary and if I had to choose between The Bone Season and Twilight I think the later edges out the winner, at least in terms of telling a compelling story.

Despite being written in first person I never felt drawn into the character of Paige, never felt that she was truly in danger or that she was going to lose anything of value.  She does lose friends and acquaintances, she is put in mortal danger but I wasn’t immersed enough to care.  I do wonder if the knowledge that there are six books to come undercuts some of the tension.

I also found some of the world building got in the way.  Any time a new type of Voyant is revealed in the text we get to know if they are an Astragalomanceror, a Chiromancer or an [insert]-omancer and my reading brain just skips over the word when I read it, because mostly its not relevant to the story.  I’m also not sure if the flashbacks, that added depth to Paige’s character, didn’t actually break the flow of the story.

It’s not all doom and gloom though, Shannon can write and there were places in the novel which glided effortlessly by.  Overall it was a middle of the road read for me, entertaining enough not to skip pages with some niggling bits and pieces that might just be my personal taste.

Is it the next Twilight or Hunger Games?  Time will tell.