Russell B Farr is a name that keeps popping up for anyone with a cursory interest in the Australian scene, and going by the answers to the questions below you can see what a solid and silent achiever he is.

Thanks Russell for your time, I can see it’s precious.

We published 5 books in 2010, 7 last year, and are on target to publish 9 this year with 8 titles for 2013 already contracted. It’s been a long time since I only worked on one title at any time.

What am I working on at this very point in time?

Then there’s promoting Damnation and Dames, and Bread and Circuses...

I’m also pondering what sort of special celebration our 50th title will be, as it’s due for publication mid-2014.

So what I should say is that what I’m working on right now is making sure I spend time with my wonderful fiancé, Liz Grzyb.

I guess I do feel a bit of pride just for still being here, as I doubt this is what I imagined when I started TP way back in 1996.

I’m proud to have been able to deliver books that really needed to be published, such as Troy (Simon Brown, 2006), Steven Utley’s Silurian Tales (The 400-Million-Year Itch, August 2012, Invisible Kingdoms, February 2013), and Sara Douglass’ The Hall of Lost Footsteps (November 2011).

I’m proud to have been able to work with so many fantastic writers over the years, too many to name but open every TP book to the contents page and there they are.

I’m proud to have put together the Belong anthology, dedicate it to my parents, and give my mother a copy before she passed away last year.

I’m probably proudest whenever someone comes up to me and tells me that they bought, read, and loved a book we’ve published.

As I said above, we’ve got 9 books coming out this year, and should be settling into an 8 or 9 book per year schedule. I think I’ve said before that barely a day goes by without me thinking of stopping the press, but there’s never a week that goes by where I don’t think I’m doing the most worthwhile thing I can. While that continues I guess I’m here for the duration, though I do expect to review things in a couple of years as we approach 20 years in this biz.

We’re contracted into 2014, with a bunch of fabulous titles coming up. This year will see us publishing (in addition to those mentioned above) awesome collections by Lezli Robyn (Bittersuite, August), Greg Mellor (Wild Chrome, October) and Angela Slatter and Lisa L Hannett (Midnight and Moonshine, November). Next year we’ve also got fabulous collections by Juliet Marillier (March 2013), Jason Fischer (October 2013), and a fantastic original sf novel by Patty Jansen (November 2013).

Obviously all of the writers Ticonderoga are publishing are producing impressive work—if they didn’t impress me we wouldn’t be working together and I’m humbled that these amazing talents are willing to work with TP. Similarly I think all of our editors are top notch.

Top of the list of editors in Australia right now has to be Jonathan Strahan, he’s truly deserving of all the accolades and success, having worked hard for a long time. He’s pretty much without peer. Also peerless is Stephanie Smith, the powerhouse behind HarperCollins/Voyager, and I’d hate to be the one taking over from her.

There’s a bunch of excitement in the indie scene, but I guess the press that seems most impressive would have to be Fablecroft. They’re still finding their feet, but I feel have a lot of potential.

I probably should also do a shout out to Penelope Love, as I think she’s perhaps one of the most creative and under-rated story writers around. Also Kaaron Warren, who gets better with every story (almost putting her 2010 Ticonderoga collection, Dead Sea Fruit, to shame).

I’ve been pondering this recently, and I think the biggest change has been a lack of change. In 1999, Aussiecon 3, a lot of independent presses geared up for a big show, produced some fabulous work, and either aimed for this to be their swan song or burnt out in the aftermath. There was a definite trough in the couple of years following.

There was certainly a big push for Aussiecon 4, a lot of awesome titles on display, and while it represented a winding down for a couple of presses overall the genre is showing a lot more resilience than a decade ago. It’s a good thing that there’s a lot going on right now. 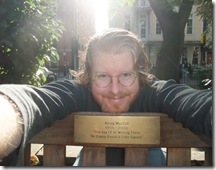 Russell B. Farr is the founding editor of Ticonderoga Publications and has published almost thirty titles since 1996. His  recent anthology, Belong, explores the concepts of home and migration. In 1999 he established ticon4, now Australia’s longest running semi-professional science fiction webzine. Previous works as editor include the award-winning anthology Fantastic Wonder Stories, award-winning collections Magic Dirt: the Best of Sean Williams, and Angela Slatter’s The Girl With No Hands and other tales, and Australia’s first work-themed anthology The Workers’ Paradise.