Deborah Kalin is the sixth interviewee in my Snapshot Interviews, and a survivor graduate of Clarion South.  Thanks for taking the time to answer the questions Deborah.

After finishing Shadow Bound, I've mostly been working on an urban fantasy/detective novel, which I've finally dragged kicking and screaming into a zero-draft state and now I've hidden it in a dark drawer for a while. I fear there's something fundamental that's lacking still, but possibly a few months away from it will help with my perspective. 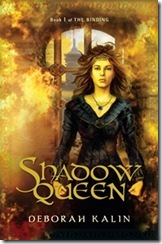 Currently I'm working on a collection of short stories for the Twelve Planets series, about which I'm thrilled to bits. It's taking quite a toll on my spare time tally, and I'm having to dig deep to write, but it's worth it for the chance to be part of this series.

I've completed one story so far, called "The Wages of Honey", which explores the cost of truth but also relies on an atmosphere of the reader knowing very little, so I can't tell you too much more than that.

The story I'm working on at the moment is called "The Briskwater Mare", which so far as I can tell seems to explore the cost of empathy. I don't tend to plan my stories in advance to any great detail, but I think the other two stories in the collection will similarly explore themes of the costs of social constructs, and the idea of personality as fate. Or at least, that's the plan. I'm very much looking forward to seeing what I can pull out of my head for this collection.

Thank you! My fondest memory of writing those books was delving into Matilde's voice. She's such a headstrong, determined and yet outmatched girl, particularly in Shadow Queen, but she thinks on her feet and she always kept things interesting.

It was in the writing of The Binding books that I realised my deep-seated fascination for interpersonal politics, and the way people communicate and manipulate and manoeuvre each other. Shadow Bound I found more difficult to write, because I'd sold the book and committed to its publication before having written even so much as a word on it. I ended up putting a lot of pressure on myself that it be quality, which ultimately I think made me work slower than I normally would.

It's the age-old cry of the writer, as always: too many ideas, too little time! Honestly I don't think I'll ever stray too far out of the fantasy umbrella, in one form or another -- but then fantasy is such a broad genre, that's not really saying much. I do have another high fantasy storyline that might fill two or three books lurking in the back of my brain, but it's sharing space with a near-future apocalypse novel and a YA novel that explores the concept of sanity, to name but two. 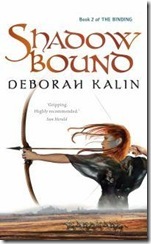 I'm very keen to get my hands on a copy of Kim Westwood's "The Courier's New Bicycle", which tackles some very important concepts and from all I hear does it swimmingly.

The other book I'm keeping an eye out for is Penni Russon's "Only Ever Always". I'm very interested, lately, in the topic of mental health, and the myriad ways we've structured our society around simultaneously supporting and destroying it.

Two years already? I think one of the biggest changes is the rise of independent press. Australia has always had a very healthy small press scene, I think, but certainly in the last two years they've been rising to the forefront in terms of winning awards and gaining recognition and prominence etc.

I think the small press scene is now more visible, and I for one really appreciate the diversity it brings to the works available to me and my reading addiction.

Deborah Kalin is an Australian author who, given any opportunity, tends to think too much. She sleeps like the dead, and pines for the pterosaurs.

Her two most recent novels are Shadow Queen and Shadow Bound from Allen & Unwin.