Kate Forsyth’s latest novel is an Historical Thriller set during World War II. Based on a Grimm’s fairytale, The Beast’s Garden is a mix of 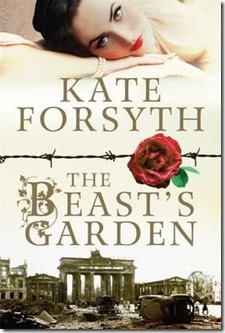 tense wartime espionage and enduring love. It’s a very human story, about what small groups of people can do and what we hope people would do when faced by an evil that is unacceptable.

1. What challenges or advantages does reworking a fairy-tale or folk tale present to you?

One of the biggest challenges in reworking a myth, or legend, or fairy tale, is that people often know the story, and so it can be difficult to build suspense, or to surprise the reader. I think suspense and surprise are two of the most crucial ingredients in any story, and so I spend a lot of time thinking about how I can subvert or confound readers' expectations, while still remaining true to the spirit of the story.

2. The setting and characters of The Beast's Garden bring with it the added requirement of sensitivity due to the atrocities perpetrated by the Nazi's.  What was your greatest concern in dealing with the Holocaust as part of your fictional tale?

It was soul-harrowing research and soul-harrowing writing. I was conscious at all times of the need to show, as much as I could, the true horror of the Third Reich, while not losing sight of hope and love and the small acts of kindness and courage that helped to save a few - only a few - from the horror of the death camps.

Isabel Allende says to write what must not be forgotten. I wanted badly to honour the lives of those who did their best to resist Hitler, even at the cost of their own lives. It's been a great relief to me that so many readers have contacted me, and told me that they found the book incredibly beautiful and moving as well as heart-rending and sad.

3. Your Doctorate in fairy-tale retelling and your recent novels would suggest that you have a far greater exposure to the genre than most people.  What discoveries have you made about the genre that might surprise those of us who grew up on abridged versions of Grimm's tales?

It was fascinating to me to discover that fairy tales have their roots in ancient myths of death and resurrection, from the very dawn of human language - around 300,000 years ago.  I had not truly realised just how old such wonder tales are.

I’d like to thank Kate Forsyth for taking time out of a relentless schedule to pen some thoughts for the blog. You can purchase The Beast’s Garden from all good bookstores or if you’re remote like me, Booktopia.