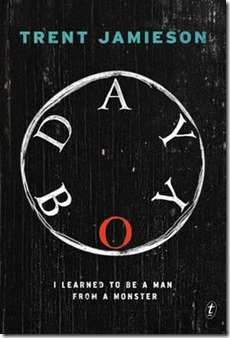 I recall Lisa L. Hannett writing about the Australian Gothic in Wide Open Fear, a piece for her column in This is Horror.  Trent Jamieson is part of that cultural/ literary trend in Australian genre writing and his previous short works and his Death Works series make valuable contributions to a cohort of  writers and writing that holds its own internationally.

Then comes Day Boy , which I think might be the finest book Trent Jamieson has written to date, and perhaps the finest articulation of Australian Gothic in a single novel yet.  There’s elements of his Nightbound Land Series, the imagery and the tone, but its subtle and more powerful for that. There’s a strong voice (haunting in its poetry) that firmly pins you down to this nightmarish world and makes you believe.

DAIN SAYS WE fight to breathe. We fight to be born and forever after we’re all rage at the brevity of the world and its multitudes of cruelties. I’m not sure about that. But we fight. And we Day Boys fight like we’re men angry and sanguine. Little soldiers marking doors with chalk, sketching the seven-pointed Sun upon the wood. Working and walking, all strut and talk—until we fight. And then the talk doesn’t matter anymore.

Writing good, entertaining stories is difficult in itself, writing stories that work one subtler levels at the same time is a sign of craft and this book is a work of well honed crafting.  You could say that Day Boy is a tale of post-apocalyptic Australia ruled by vampires as seen through the eyes of one of it’s yet- to-be masters and you would not be wrong but you’d be missing much: Jamieson’s artistry at bending well used genre tropes to his will, his explorations of relationships between fathers and sons (even if they are proxies), about the relationship or tension of living with the Australian environment (even in its post apocalyptic state) and about loving, losing and growing up.

It’s a work that the Australian Speculative Fiction community needs to notice not just because its a fine rendition of what one of our best writers is capable off, but of what can separate Australian writers from a homogeneity of genre tales internationally. I commend Text Publishing for publishing it, for recognising why it’s an important tale and for perhaps exposing it to a slightly different audience.

Buy it or borrow it. Just don’t miss it.