Book Review - How to Haiku by Bruce Ross 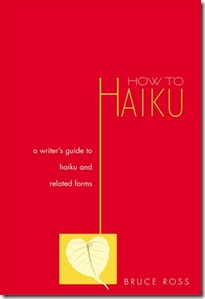 I continue to find writing Haiku endlessly fascinating. It’s a form that I can return to again and again and still find something fresh.  So I am always keen to read advice on how to write Haiku.

I don’t tend to favour an overtly spiritual approach to writing the form and so Bruce Ross’ approach, which I feel does stem somewhat from this vein was initially …well not off putting, but presented a small hurdle (this is my baggage I think). The again, perhaps I am simply focussed on improving my technique and any “fluff” so to speak, how ever eloquent, poses an annoyance ( patience Sean-san).

How to Haiku doesn’t knock of its pedestal, Jane Reichhold’s  Writing and Enjoying Haiku - A Hands on Guide, as my number one recommendation for new Haiku writers. I did find it offered additional insight though.  So I think that its worth coming to, after you have had some experience and experimented with techniques outlined in Reichhold’s work.

In general I enjoyed Ross’ inclusion of relatively contemporary American Haiku in addition to traditional Japanese examples.  I felt that this gave me a sense of where tradition has been continued ( albeit slightly altered through the change from Japanese to English) and where contemporary Haiku poets have begun to experiment or diverge.

I also enjoyed the inclusion of other forms of Japanese Poetry ie Haibun, Tanka, and Renga/Renku.

One of the things that I struggle with in reviewing poetry is the technical language with which to talk/ discuss it.  Ross’ explanation/analysis of the poems he presents was aimed at a broad audience (leading some readers to criticise it as boring) which I think acts to both give the reader some pointers on how to talk about Haiku in addition to providing an explanation of the content and techniques.  Better to over explain I think.

Like Reichhold I do appreciate Ross’ “Guideline” approach to the writing of Haiku.  He presents the tradition, gives you examples of that tradition – contemporary and pre-modern and leaves it up to you.  I think this allows for respect of the form without slavish adherence to rules that I think will ultimately restrict it and result in stagnation.  His discussion on the difference between the qualities of Wabi and Sabi was also helpful.

In each of the other forms mentioned above I gained something from reading Ross’ work.  I have struggled for sometime to attempt Haibun and Ross provided four different approaches and highlighted traditional and contemporary examples.  His identification of the divergent traditions of Tanka were similarly illustrative.  His explanation of the linking in Renga was perhaps the best I have come across.

So, a worthwhile addition to your library?  I think so.  Not a beginning point but certainly worth it for those with some experience/exposure to the form under their belt.