Book Review – Gentlemen of the Road by Michael Chabon 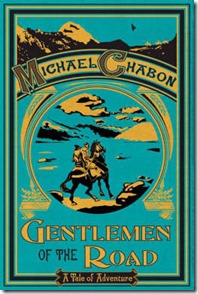 This is the first book by Chabon that I have read.  It wasn’t the name that attracted me ( it was familiar) but the production of the hardbound edition by Sceptre.  The cover as you might be able to tell harks back to an era of adventure novels with gold embossed decoration and the inside covers feature a full colour map.

Ah maps, the value of a wonderfully rendered map.  Gentlemen of the Road also features some lovely black and white illustrations by Gary Gianni.

So the presentation caught my eye.  I can’t say that I would be stirred to pick it up if I had seen the paperback cover that this review links to at Booktopia.

Originally published as a serial in the New York Times magazine it does tend to move forward in small jumps.  Some reviewers found that this undercut the momentum of the story in novel form.  I just found it very easy to pick up, put down and pick up again.  I think the serialised approach to story construction may help some readers deal with the stylised language (beautiful paragraph long sentences in some cases) though after a few chapters I found myself delighting in the work of a skilled craftsman.

The African reined in the tottering horse with its flecked lips and wild eye, and the travellers dismounted, the African with a weary grace and no expression, the scarecrow with grimaces and a show of soreness in the underparts.

Much of my entertainment stemmed from Chabon’s prose.  The plot is nothing extraordinary, the action, for an adventure story isn’t really seat of your parts, but I don’t think this is what Chabon was really trying to achieve.

We have two Jewish rogues, on adventures getting caught up in situations they know they should avoid.  It’s light hearted adventure with smooth writing.  If I can make one observation (bearing in mind that I don’t generally read that type of adventure novel that Chabon is riffing off) is that the treatment of Filaq and certain things that happen to him seem to be glossed over and resulted in a crack in my suspension of disbelief (I am aware I am being a bit cryptic here but I don’t want to spoil things).

Its all very well to have a cracking good adventure and everything is squared away nicely at the end… but there were elements of a sexual and violent nature that I thought may well have sat fine in an adventure novel written in the 19th century but I’m not convinced they do so well here.

That being said, it was an enjoyable read.  You can purchase a paperback here at Booktopia.