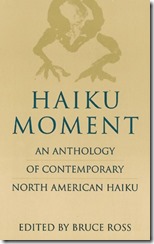 Let’s face it.  If you are not “into” writing and reading Haiku then you might find the some 800 odd poems in this anthology a bit thin.  I think in most cases Haiku can be a bit of an acquired taste (though a relatively easily acquired one).  But I really did enjoy it.

Now it’s touted as contemporary, but the selections were made from poems published in the decade 1982 to 1992, making it 20-30 years out of date.  As an indicator of what’s going on in English rendering of Japanese form poetry currently, it possibly has less value.  It does bring together a good slice of North American poetry of that period, minus some noted poets.

There’s a succinct(okay it’s 30 pages but there’s a lot of info squeezed in) introduction to the collection that covers what elements make up Haiku, both in traditional Japanese and English language Haiku, the four masters Basho, Buson, Issa and Shiki are covered and the intersection with the Imagists Ezra Pound, Amy Lowell and later the Beat Poets.

The introduction should prepare you well enough to enjoy most of the works that follow - I come to it as a practitioner of the form so its hard for me to tell.  Being Haiku, the majority of the poems a nature/ observation based.  A note on the poems splits them roughly into two types:

…. these haiku are meant to reflect either the style of the Basho School of haiku with its emphasis on the presentation of temporal loneliness and emotional objectivity in the treatment of nature subjects (and occasionally, as in later Basho, an elevated warm-heartedness found in one's relation to commonplace things) or the haiku of Issa with their joyful evocations of the liveliness and empathic resonance found in the natural world. All of the haiku in this anthology, moreover, should convey a moment of insight experienced by a poet in real time through real beings and objects, a moment that the reader may enter and share.

Some of the difficulties I experience in finding good Haiku to read and learn from, is discerning good sources (this is becoming easier as a grow as a poet).  Anybody can attempt a Haiku (and many do) though I am not sure how many see it as anything other than writing something poetic in 17 syllables.  A search for Haiku on Kobo will give you hundreds of books of whose quality it can be had to determine.  Haiku Moment addresses that problem to some extent. It gives you a sense of what one well known gatekeeper thinks is quality Haiku and you can then attempt to track down works of the poets contained therein.

Here are three haiku to give a general idea.  Mind you there’s 800 to choose from.

Summer is over.
A horse walks its reflection
along the lake's edge

The way silence waits
and waits ... for the next
cry of the loon

migrating geese
one falls farther and farther
behind

You could jump straight into the work having never read Haiku before, but the real value I have found is as a source for good examples of the continued lineage of the form.