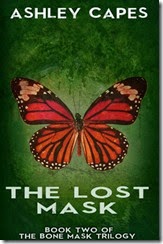 I was really delighted and surprised by Ashley Capes debut in the fantasy genre (see my review of Book 1). I felt that for a debut novel, City of Masks, showed considerable polish. I think Capes has backed up well with The Lost Mask, all of our favourite characters and villains are here and there’s some interesting developments in world building that further expand on the world of City of Masks.

In many ways The Lost Mask is a typical book two in a trilogy, you will need to have read book one.  Capes is sparse on the info dumping paragraphs some authors/publishers include to bring readers up to speed( indeed I hesitantly suggest he hasn’t included any) and considering it’s only a year since book one was released fans shouldn’t need a reminder of who Vinezi or Ain are.

The major change I feel is a subtle shift in tone. With The Lost Mask,  I feel we have moved from a intrigue/thriller to adventure fantasy.  We still have the same set of beloved characters, but plot lines have crossed and so this book feels much more like King Oseto’s story to me.  There is less skulking in secret passages and imagining the carved faces of the Mascare, more dealing with the management of a dead and poisonous Sea Beast and preparing for open war.

In The Lost Mask, Sophia and Notch have teamed up in search of Sophia’s father who has fled to the Bloodwood.  Flir and Luik are employed in devising a plan for ridding the city of the Sea Beast carcass( which is poisoning the bay and the populace), and preparing for an imminent invasion.  The trouble caused by Venezi simmers and the truth behind the Greatmasks grows steadily more apparent. Seto, now King, realizes a long held ambition only to come face to mask with what that ambition is going to cost him.

I did enjoy book one for its fantasy cloak and dagger - the atmosphere created by the culture of the Mascare.  I felt that this element was missing in The Lost Mask (hence my comment about tone) but what the reader gets in exchange broadens the concept and the history behind the masks and the power of the Sea Beast’s bones. Like a good second book it broadens our understanding of the world and increases the stakes.

Unlike City of Masks, The Lost Mask finishes on a cliff hanger of sorts and leads us into what will be an interesting conclusion in the final book.  I thoroughly enjoyed it and hoped that we might see this series make a mark in the Aurealis or the Ditmars. Nevertheless if you like well paced fantasy with originality of concept, check this series out.

This review is based on an early eArc provided by the author.