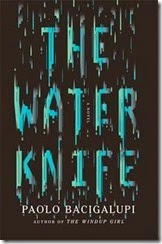 I have enjoyed (if that’s the right word) Bacigalupi’s vision of the near future in his young adult works, Ship Breaker and The Drowned Cities.  In The Water Knife, he returns to adult fiction and by adult I mean that the story is reasonably complicated and deals with mature concepts.

The Water Knife depicts a near future where state and corporate factions fight for water rights in a crumbling South West America (Nevada, California, Utah, Texas Arizona). The situation is not quite open warfare, a federal government still exists but states act to protect their borders from refugees (Texans get it bad in this future) moving from the poorer states.

The story focuses largely on a reporter and a water knife(a trouble shooter / trouble starter for one of the states) as they become embroiled in a search for old water rights that could upset the well laid plans of powerful entities.  It’s fast paced, full of shootouts between gun toting Texans, Hispanic gangs and agent provocateurs from any entity in the market for making money off of misery.  There’s torture and violence of the kind you’d expect in a world of failing states who can’t supply their populace with clean water or sewerage and who have really given up on caring.

The Times anointed Bacigalupi as a successor to William Gibson, and while The Water Knife, isn’t cyberpunk, it’s a future unevenly distributed, with corporations and foreign powers beginning to carve out influence for themselves in a union that is slowly failing.  A slow apocalypse, an eco-thriller, an action adventure,The Water Knife is a fast paced and dirty look at what might happen when the water all but dries up and the lawyers are all but finished determining who owns the rights to what’s left.

I suspect that the novel is firmly grounded in some of the issues surrounding water rights in the South Western states today and The Water Knife has that edge of realism, the world seems only to have been extrapolated out by a number of decades. Indeed the kind of jockeying for access to rights observed in The Water Knife doesn’t appear to be that much different to what occurs with companies exploiting exploring for fracking opportunities in a number of countries.

It’s not message fiction (unless perhaps you don’t think there’s any climate change), it’s firmly bedded down in moral greyness  Indeed talking about distribution, it wouldn’t be hard to find situations and themes presented in The Water Knife existing in third world countries now or in the  last 20 or 30 years, the difference here is of course the setting is the US.

It was a quick read, enjoyable and interesting for its focus on a more plausible slow apocalypse.  This is good sci-fi examining the issues we face now and suggesting where we might end up.

This book  was an Advanced Reading Copy.