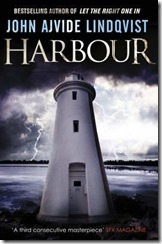 The back cover of my copy of Harbour  touts Lindqvist as reminiscent of Stephen King at his best.  Having read both of them (though not in great depth) I can see the similarities.  Both present a cast of characters and spend a good deal of time engaging the reader in the lives of these characters whether or not they are central to the plot. The result of this approach, with me at least, is that you become very attached to and embedded with, the characters before the author turns the screws.

Harbour presents the reader with a slow build up. Lindqvist interlaces stories, history and flashbacks to drip feed gradual reveals about the truth of the horror that surrounds the island of Domaro - a fictional island in the Swedish Archipelago.  The tale starts with Anders and Cecilia's 6 year old daughter Maja, disappearing as the family is exploring the lighthouse in the middle of a frozen bay. With the ice frozen a metre thick, it appears she has vanished into thin air.

This beginning tragedy is done quite well even when you know it is coming.  The story then jumps forward past the inevitable split between Anders and Cecilia, to an Anders drowning in alcohol and on the verge of suicide. He decides however to return to the island and from here it is a story about unlocking Domaro’s dark past, that of the islanders and finally determining what happened to his daughter

Lindqvist’s weaving of myth, history and tall tales is one of the strengths of this book.  The reader comes to know the island and its peoples, consequently we get a very good sense of place.  The second strength is the well crafted brooding natural horror that slowly turns toward the supernatural or even mythic by the end of the work.  It stops short of cosmic horror and averts comparisons to Lovecraftian tales of villages by the sea.

The are some grotesque elements but these pale in comparison to the discomfort caused by the unknown deep.  The sea and its immensity, its place in our consciousness as a vast entity is the most compelling part of the work and Lindqvist has done a very good job of leveraging the readers natural fears.  I think because of this success the ending was never quite going to match the slow building intensity.  I also think I prefer a story that is a little ambiguous in its ending, something that plants doubt in the readers mind, that leaves open the possibility that the tale could be true and unfortunately there is a clear resolution here.  That being said I enjoyed the build up.

Harbour can be purchased from Booktopia.