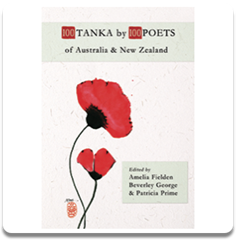 I stumbled upon this recent release searching for Tanka on the South Australian Library database. 100 Tanka… is published by local South Australian publisher Ginninderra Press, who I also note have been quite active in supporting a number of poets with pamphlet productions(Pocket Poets). They also publish Haiku and Haibun of one of my fave poets Ashley Capes.

I was pleasantly surprised by the discovery and the fact that the anthology was only released two years ago.  Why?  Well because in my digital travels there’s very little evidence of serious publication of the Japanese forms, in Australia at least.

The flagship journal A Hundred Gourdes is unpaid and international but other than that there doesn’t appear to be a strong community (perhaps I’m looking in the wrong area) pushing the forms.  Most of the educational materials I come across seem to indicate a small flourishing worldwide in the 90’sand after that...

I suspect that most poets overlook the form, misjudge its subtleties.  It can be quite easy to construct a Tanka and much like Haiku the form isn’t that hard to pick up.  Like Chess though, you can learn the rules but it can take considerable effort to produce something good.

So what we have here (before I bore you with my theories on the underutilisation of the form) is as the title describes, 100 Tanka by 100 poets, one poem each from Australian and New Zealand poets.  The construction of the anthology in this fashion has an historical precedent, in Teika’s Ogura Hyakunin Isshu published around 1235 AD. This historical anthology was meant to help aristocrats cultivate culture and was quite well known and popular.

100 Tanka… presents the best of Australian and New Zealand Tanka poets, the works all seem to have prior publication either online or in print and some of them I recognized as entries in the Tanka Splendour awards that were held during the 2000’s.  So take a poet and ask them to give you their best published Tanka and you are fairly sure of getting a quality product. With what little education and practice in the form I have, I think 100 Tanka…  is a really good example of the diversity and the quality the form can produce.

You don’t need to know the history or the concepts behind Tanka  construction to enjoy this collection.  These Tanka present observations and emotion in fairly approachable language.  I suspect that the only problem modern readers will have is with the speed at which these works can be read.  It can be easy to skim over 5 lines get a sense of what is imparted in the text.  I advise reading one or two at a time and letting the words sink in.

I’ll list a couple below to give you the idea:

where he planted poppies

she remembers to march

walking on the beach

as a blood sun sets

the indent from your ring

on the holy mountain

none own the shadow

I think 100 Tanka … is an important work for a number of reasons.  It’s a great example of the form, as it’s practised (hopefully still) in Australia and New Zealand, it collects works that may have been consigned to a digital death in a far off uncharted corner of the net, or in print journals that have stopped and it’s a guide for those of us that stumble across the form.  Saddle stitched and roughly A5 in size with beautiful illustrations by Tasmanian artist and poet Ron C Moss, I have enjoyed carrying it around with me and using it to inform my own practice.