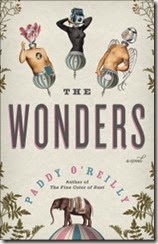 The Australian Science Fiction Foundation has announced the shortlist for the 2015 Norma K Hemming Award.  The award is given to works that focus on topics of race, gender, sexuality, class and disability in speculative fiction.  This year’s list is fairly varied.  The only work I was not aware of is Paddy O’Reilly’s, though the more I think about it I may have seen him her interviewed on the Book Show.   Booktopia have some signed copies here, if you are quick.

EDIT: Paddy O’Reilly is actually a woman.  My apologies to the author who I obviously hadn’t heard of.

Nil By Mouth novel by LynC, published by Satalyte Publishing in June 2014

North Star Guide Me Home novel by Jo Spurrier, published by HarperVoyager in May 2014

Further information can be found on the Awards here.