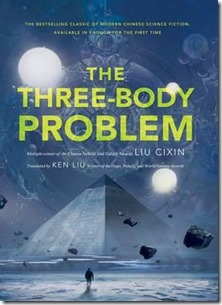 I have been interested in The Three Body Problem since I heard Ken Liu talking about his translation of it on our own Galactic Chat podcast.  I do really like Ken’s work ( I am eagerly awaiting his fantasy novel) and I was also interested in seeing the difference in the translated work and Ken’s own style.

So what to expect from China’s most popular science fiction author?

Well if you were thinking of some workers paradise in the stars, where the dirty capitalists learn the error of their ways, you’ve possibly been watching too much Fox news.

We begin in the late 60’s and the Cultural Revolution is in full swing.  For the rest of the novel the reader moves between that past and the present until the two meet in each timeline’s important characters. So initially The Three Body Problem had a strong historical feel to it and I got a sense that Cixin was really laying some very solid foundations.

For much of the novel the reader along with Wang Miao, the nanotech researcher who is our present day protagonist, is pulled along by a mystery; strange deaths of scientists involved in fundamental physics research, virtual reality games that seem to simulate a mathematical conundrum and an alien civilisation, a powerful alien force that seems to be able to affect the universe on a fundamental level.

The Three Body Problem is fairly low key science fiction in the sense that it probably closer to the heart of traditional science fiction where a story is built around solid scientific ideas or process.  Indeed we never leave Earth or the current day in this book.  Much of The Three Body Problem deals with the characters and how the cultural revolution directly or indirectly affected their lives and I suspect gives strong reasons behind future actions.

What kept me reading was the mystery, while some of the science had me wavering it was the revelations that Cixin artfully drip fed to us that kept me turning the page.  The Three Body Problem is more Contact than Leviathan Wakes, but its an exceedingly well done work and I find myself anticipating the next novel.

On the translation I believe Ken has done a great job, I certainly don’t feel like I am reading Ken Liu but I am entertained and intrigued nonetheless.