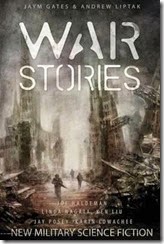 There’s comfort for me, as a reader, in Military science fiction.  A result perhaps of early encounters with Star Wars (with its military elements), stories like Philip E High’s, Come Hunt An Earthman and the Battletech novels. Add to this, Saturday showing’s of 50’s and 60’s Hollywood war movies and its all very familiar territory.

At some point though I felt as though I grew away from the enjoyment of reading about a band of heroes running off to fight an evil enemy, an other. Naturally, as you grow up things fade to shades of grey.  Sure I can be entertained by Independence Day and the seemingly endless iterations of War of the Worlds, I can even appreciate the extremely well done, paint by numbers movie that was Battlefield: Los Angeles.  But to really enjoy Military science fiction these days, there’s got to be a bit more meat to the story, something along the lines of District 9 in literary form. War Stories fit that bill for me.

Aliens, hi-tech goodies, horror, slow apocalypse, genetic experimentation and cyber warfare, it’s all here along with good deal of variety and smart storytelling. With such a wide scope the editors have broken the collection down into broad categories: Wartime systems, Combat, Armoured Force and Aftermath.  I note too, that in typing this there’s been an effort to try and present the totality of war, its mechanics, the combat and what comes after.

The collection starts with one story outside those categories, Graves by Joe Haldeman, which is more horror than sci-fi and is historical (Vietnam War), still a very nice piece though.  Following the Haldeman is Ken Liu’s In The Loop a story that really did set up my expectations that this was a collection I was going to enjoy. It seemed to underline the cost of war to its participants (even when distanced) as well as problem of relying on hi-tech equipment even when that equipment is designed with the best of intentions. Indeed most of the stories in Wartime Systems seemed to echo this last point. Equipment failure seems to add realism (at the same time as it adds story conflict) to all war stories.  The other two standouts for me in this category were: The Wasp Keepers, which explored the problems inherent with maintaining a peace through strict surveillance and the effect the suppression of outward violence can have on a populace and individuals and Non-Standard Deviation which I found to be a smart take on the development of AI enemys for training combat troops.

In the Combat category it was Linda Nagata’s Light and Shadow and Thoraiya Dyer’s One Million Lira, that caught my attention.  Light and Shadow examines the problem of how to develop the most effective soldier so that when they are placed under pressure they are calm and react in the most efficient way.  In Nagata’s world the military has achieved this through linked skull caps that bind the unit together and suppress emotions/reactions of individual soldiers when it’s determined appropriate.  The tone of the story echoed very much some current discussion the Australian community is having about treatment of veterans – how we train people to deal with combat stress but seemingly abandon them when that training eventually fails or the psychological effects catch up with individuals.  One Million Lira was simply a good, well paced sniper story featuring a female protagonist and antagonist, thankfully absent were powerful US or European powers, this was a dirty, low scale war fought between those left behind.

Warhosts by Yoon Ha Lee in the Armoured Force section was worth a second read and is possibly the best in the collection for me.  It mixed genetic and biological enhancement to a degree to which the reader feels that the humanoids presented are no longer really human. The conflict is between Purples and Reds, between forces that can manipulate their combatants genetically, grafting weapons biologically. It’s wonderfully visceral in its description and alien in its telling. I found Warhosts to be very unsettling in a good way.

Of the final section Aftermath, two stories stood out, combining previously used ideas to good effect.  In War Dog we follow the life of a retired major, a veteran of a war with China and the second American Civil War. It’s set in a Florida ruled by the Christian States of America,  home to fallout of chemical weapons that turn humans into walking fungal spores and where genetic abominations used in the war are hunted down.  War Dog is part love story, part statement on the harsh realities of the aftermath of War. The final story War 3.01 finished off the collection with an interesting take on psychological warfare - an information war fought inside our internet enhanced heads.

Intelligent and entertaining is how I’d describe War Stories with diversity in authors, content and storytelling.  I always felt as if I was reading something new.

This copy was provided free of charge.