To celebrate the release of the Fall of the Fair Isle Omnibus, one of my favourite Australian fantasy writers has agreed to write a guest blog.  Please enjoy Rowena’s post on:

Science Fiction books can be SF-thrillers, action adventure and mysteries. It is a versatile genre and often explores the philosophical theme: As technology advances will we lose our humanity?

Meanwhile, Fantasy is known for the Quest: Can we defeat evil (which is usually encapsulated in a magical being or object) so that good can triumph. But fantasy is not limited to the black and white portrayal of good and evil.

With King Rolen’s Kin, I set out to write the kind of rollicking action adventure fantasy that kept me up all night when I first discovered fantasy. The narrative was supposed to be an examination of power and what people will do for it, following King Rolen’s four children and the choices they make when their kingdom is invaded. I concentrated on the King’s second son, Byren but before I knew it Byren’s friend, Orrade revealed that he was gay and this led to complications for Byren. Protecting his friend left him vulnerable.

I found myself exploring the question of friendship, brotherhood and being true to oneself. By the end of book four we saw what Byren would do for power and the consequences even if the motivations were pure.

When I wrote The Outcast Chronicles I knew this trilogy would explore two related themes. The narrative followed the fate of a race of mystical beings called the T’En. This gave me a perfect opportunity to explore racism in the denatured setting of fantasy. And since the T’En society was divided into sisterhoods and brotherhoods, I was also able to explore issues of gender and trust. This trilogy was a finalist in the Hemming Award 2013.

The Judges said: “The Outcast Chronicles trilogy is a tour de force of extraordinarily detailed world building. Rowena has created political intrigue, attempts at genocide, a dangerous world of magic that many believe to be gods, with flawed, noble and ignoble characters on all sides. There is poetry and wit in the writing, and characters that stay with you long after you have finished this gripping trilogy.”

I quote this because the fantasy genre gave me the opportunity to delve into characters who were ‘different’ without alienating the reader due to a preconceived prejudice. 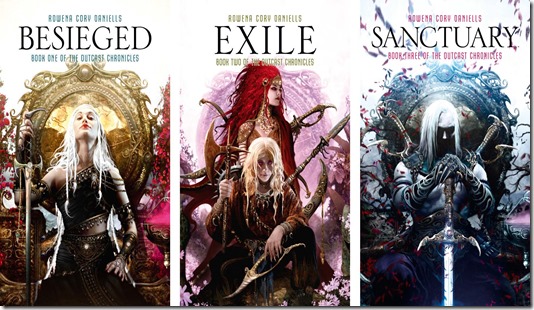 The Fall of Fair Isle was first published between 1999 and 2003, released as three books, now Solaris have released it as an omnibus edition. Set 600 years after The Outcast Chronicles it can be read as a stand-alone.

This is a more intimate story than The Outcast Chronicles, delving into the motivations and dilemmas of the three main characters. Imoshen, named after her famous ancestor, the last surviving member of the royal family, must surrender her stronghold and her island to General Tulkhan, son of the Ghebite King’s concubine, who conquered Fair Isle to win his father’s love. She agrees to help him smooth the transition of power. But all does not go smoothly because Reothe, Imoshen’s former betrothed, has survived and he needs her help to win back Fair Isle.  Should she keep her word to the General or is she bound by her older vow to Reothe?

At its core The Fall of Fair Isle is an exploration of duty and honour, and because Imoshen is a throwback to her T’En ancestors the narrative also examines gender and racism.

King Rolen’s Kin was a rollicking adventure fantasy, The Outcast Chronicles was a political intrigue fantasy and The Fall of Fair Isle is an intimate glimpse of people caught in the crucible of power. All three examine honour and the choices we make using the fantasy genre as the medium.

This genre is really much more versatile than people give it credit and I love it when I find an author who is willing to push the boundaries.

I hope readers will enjoy The Fall of Fair Isle. 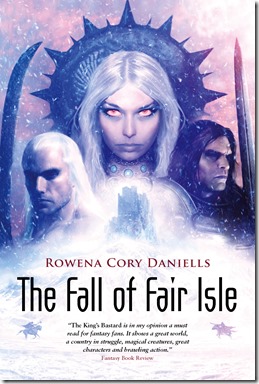 The Fall of the Fair Isle can be ordered through booktopia.