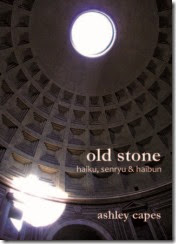 Ashley Capes continues to impress me.  I have previously reviewed his poetry collection Stepping Over Seasons and have also had the pleasure of reviewing his debut fantasy novel, City of Masks.  His ability to straddle such diverse genre spaces would have me jealous if I hadn’t come to know him as such a generous and warm hearted author and poet.

As the title of the book forewarns, old stone is a 45 page collection of Japanese form poetry.  Now, some poets and readers might look down their nose at Haiku and Senryu as perhaps childish or unchallenging.  Indeed Peter Sansom in Writing Poems, was particularly (and entertainingly) cutting in his summation of the form and the peculiarity of some of the poets who like to specialise in it. Being a writer of Haiku and Senryu myself I have a difference of opinion.

Haiku and Senryu in my experience are similar to a game like chess.  It’s easy to learn the rules but can take a lifetime to master or in the case of poetry produce something lasting.  If you are still of the opinion that Haiku are just seventeen syllable poems, it might be worth learning a bit more about them.  I suggest and introductory text by Jane Reichhold.

The challenge with Haiku, especially Haiku divorced from its cultural roots is to take what is a simple form and produce something startling, something memorable (see my post Translations).

But that’s enough about Haiku and Senryu in general and on to Capes works in particular.

Some of these works I had the pleasure of reading prior to publication, either in other publications or in some correspondence with Ashley.  A number of the works appear to be themed or relate to his travel in Italy, but they are not so tied to place that one can’t appreciate them.  Indeed we get to be voyeurs and vicarious participants of place and mood at a fraction of the cost of a plane ticket. The power of Haiku is that of the moment.  If you are doing it well the reader is getting an image, a sense of a place.

Senryu are Haiku not bound by certain strictures involving seasonal words(a basic definition), they are often humorous, witty or risqué.  One of my favourites is

What I really enjoyed about the collection was the Haibun – a combination of prose poetry observation and a complimentary Haiku.  It’s a form that I haven’t attempted and I like the considered observations written by Ashley and his choice of Haiku to accompany them:


the spot where Caesar’s body was burnt seems to scare our guide. she does not look at the flowers, a sheen of sweat on her face as the sun works its centuries-slow destruction on pillars in the Forum

up where the Vestal Virgins had their garden, rose beds breathe easy. green pools might once have hidden tears or swallowed sighs. of the many statues, only two have heads and their creamy robes are mute. people rest before them, hands on hips

posing for photos
other tourists
fill the frame

To appreciate Haiku and Haibun it pays to have a little understanding of the restrictions/guidelines that contemporary Haiku poets use.  Almost anyone can appreciate and delight in a straight reading of the above but familiarity with the form will add to the experience.

It’s a thoroughly enjoyable collection that is rewarded by subsequent re-readings. old stone can be purchased through independent Adelaide publisher  - Ginniderra Press (click here and scroll down).  I won this copy.