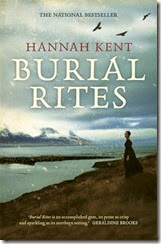 It’s always a little difficult to read and review a book that has received a good degree of hype, deserved or not.

I can’t help but read Burial Rites with an expectation that it be good, very good.  It has won about four awards to date and been shortlisted for almost twice that number.  Kent was rumoured to have received a six figure advance in addition to earlier prize winnings and this is her debut novel. She is a fellow South Australian and has been well supported by local media. She’s also received national coverage in the form of an Australian Story profile.

Any Australian reading Burial Rites will have to negotiate this coverage and the expectations that grow with it. They will also know to some degree the narrative, or at least its outcome.

Taking on an historical figure as a central character is always going to bring with it challenges.  Those challenges would be difficult for a writer at any stage of their career, let alone someone on debut.

So the big challenge is getting us hooked into a story we know the outcome of. Has Kent done this?  Yes and convincingly so.  She does this first, by slowly conjuring a believable and stark setting, remote Iceland in the early 1800’s.  Historical excerpts (translations of articles, poems and letters) give the work a certain verisimilitude but I think Kent’s skill, her almost poetic description of the land, the elements and the people breath life into this story.

Much of the story takes place within tight confines.  Agnes Magnusdottir has been sentenced to death for her role in the murder of two men.  She is billeted with a local farming family while awaiting the execution and it is at this farm that we begin to learn her story - the story of her life as well as the events leading up to the murders.

Part of the popularity of this story is I think that it is not particularly unique in the wider sense of the treatment of women.  Indeed the story of last woman executed in South Australia almost mirrors the events in this book.  Burial Rites’ relevance though stretches beyond that.  We can find similar examples in women currently prosecuted for murdering their husbands, despite being the victims of repeated sexual and physical abuse.  In that sense the story of a women born and executed nearly 200 years ago has direct relevance to modern lives.

I did feel very much confined in the reading of this book, as if I were in the room or claustrophobic baðstofa with the family.  Quite a feat if you consider I was seated in a room with fourteen foot ceilings in the midst of an Australian summer.  It is an indication of Kent’s skill in weaving a believable story.

Kent has also delivered a character who is easy to like.  Agnes is intelligent, inquisitive and a hard worker. She’s also an archetypal underdog who bears most injustices resolutely and never quite presents as the victim.  That she ultimately dies in this story doesn’t diminish her.

Try to ignore the hype, come to Burial Rites in the expectation of a moving, well executed story. A story that might cause you some reflection but that will definitely deliver you to another time and place.