So yes a little late considering that we are midway through January.  (The inspiration for Gender audits can be found here.)

However here are the results.

Note these figures are based entirely on books received for review and don’t include any reading done for Aurealis.  I haven’t included anthologies with more than two authors in the count (this rules out two anthologies that were mostly, if not solely female).

So, total number of books read excluding these anthologies is 53.  Where books featured a male and female author I have awarded a tally to each (there were two volumes with mixed authorship so I tallied one book for each gender).

Hmmm so much for my target of 60/40 female to male reading. I realised upon compiling this audit that I hadn’t done one for the end of 2013 either.  So applying the same rules as per anthologies…last year was much better. 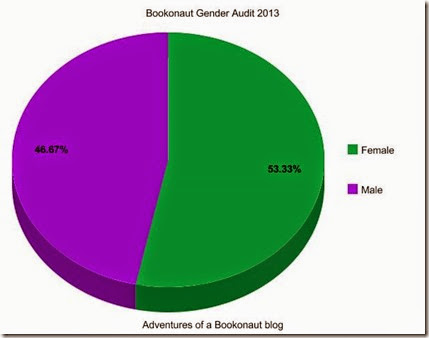 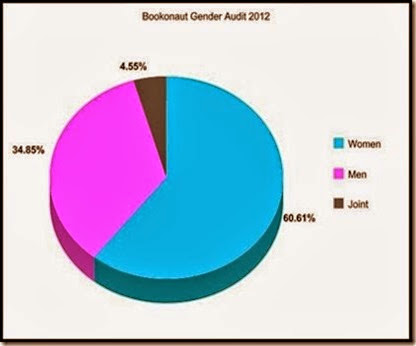 There are a number of factors that probably feed into the results this year.  I read a number of nonfiction books in 2014 and if you exclude poetry, all the non-fiction books were authored by men. I admit aside from the Australian Women Writers Challenge I have not had a deliberate focus on women ie I have not sat down and considered whether or not I should read a book based on gender.

Perhaps that is a requirement if I want to hit that 60/40 target.  The results confirm my suspicions that without a deliberate, structured approach to redressing a reading imbalance I will tend to read more men.