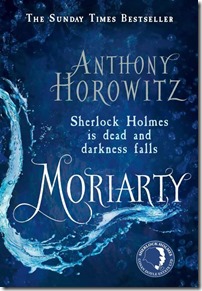 No, not really. Not unless you have been hiding under a rock since Federation.

Holmes’ death is largely immaterial to events that play out in this novel. He doesn’t appear (or does he?) but his and Watson’s roles are taken up by the American Pinkerton agent and narrator of this tale, Frederick Chase and Athelney Jones, Scotland Yard Inspector and Holmes fanboi/stalker.

Moriarty is a Holmesian tale that occurs after the death of Moriarty and Holmes at the Reichenbach Falls.  Our narrator Chase, is on the tail of an American master criminal who he believes was attempting meet up with Moriarty to form a continent spanning criminal empire.  While at the Falls he meets with Scotland Yard Inspector, Athelney Jones who has been sent from London to inspect the body of Moriarty.  Holmes’ body isn’t found.

Chase and Jones set out to impersonate Moriarty and meet with the mysterious American mastermind so Chase will get his man. Jones is an admirable Holmes stand in, having being spurred on by his offhand treatment in Dr Watson’s narratives to become a more Holmes like detective.

The story supplies ample action and mystery for the Holmes fan and if you let yourself get drawn in you will be surprised by the resolution.  This is a good outing from Horowitz in a field so well ploughed.