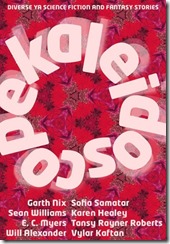 I can’t remember at which point I forgot that this collection was diverse YA and just plain enjoyed the read.  I’d backed this particular project out of a belief in the publishing team, the writers they managed to bring on board and the idea that a diverse world is a better world.

So I am biased, but bias can only get you so far if the product is lacking.  Thankfully (though I can’t say I honestly doubted the editorial team) Kaleidoscope, is not lacking, far from it.  Sure there were stories that weren’t “my thing” (two from memory that I just couldn’t get into) but on the whole this project seemed to have a coherence, flow and quality that I have come to experience more in single author collections.

I can’t comment on some of the stories due to Aurealis Award Judging commitments but I will draw your attention to stories that in light of current discussions around YA in Australia, struck me as pertinent:

So there were stories that focussed on broad issues and included diverse characters as part of the backdrop i.e. not every main character had to be the diverse character and not every story was about that diversity.  Some stories mentioned gay characters in passing, as in John Chu’s Double Time, where there’s a one line mention of the male coach’s boyfriend. Others like Garth Nix’s Happy Go Lucky had gay parents as secondary characters. There’s no reason why any author couldn’t do this in an effort to present more diversity.

All the stories though, put story first or  entertainment first, Karen Healey in Careful Magic takes an OCD witch in training, which would have been interesting just as an exploration of that condition in a contemporary world with magic and turns it into a edge of your seat story of suspense.  John Cho meshes short term time travel with figure skating and overbearing parents; high concept meets human story.

Only one thing is better than finding a character that you can identify with, who is just like you. That thing is having other people see and perhaps gain insight and understanding into what it means to be “different”.  Kaleidoscope, should achieve this, it has for me.

If you are critical of YA fiction I’d like to have you read this collection.  If you can find stories that tackle diversity better than this collection, I’d also like to know. On reflection I am content to say that if this collection is anything to go by, Kaleidoscope is evidence that some of the best diverse fiction is being written in the YA category.