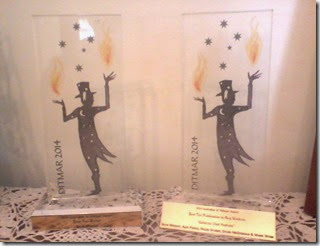 You will hopefully have noticed my absence from the blog and social media until today. It may lead you to think that perhaps I had bunkered down in the reading trenches and was chewing through my stack of review copies.

I have in fact been at Continuum X in Melbourne for the 53rd Australian National Science Fiction Convention.  It was a blast, as it was two years ago when I went to my first.  Great speakers, great friends, awards and entertainment, but more on that later when my memory of the events recovers. It truly was a wonderful event that deserves its own post.

I managed to lock myself out of twitter on my ancient Kobo tablet on the Friday, and it’s never handled Facebook well so I spent the entire time off social media. I did have withdrawals, particularly when I got email notifications from people having fun. At least until I realised that I was at the event they were tweeting about and could experience it first hand.

Sunday night the Ditmar Awards were held. Kirstyn McDermott and Ian Mond had a rest from comparing this year and were I think it’s fair to say, given a run for their money by Narrelle M Harris and George Ivanoff.

They performed a wonderful comedy routine, keeping the awards flowing fairly smoothly.  George, a man with excellent elocution and diction managed to drop an unintentional f bomb when he ran the phrase “if I can ask” together too quickly when calling Kirstyn McDermott(I think) to the stage.  Like a true professional he hammed it up and was very particular in his pronunciation thereafter.

But to the topic of the post.  I managed to pick up two Ditmars – a joint one for Best Fan Production in Any Medium shared with my Galactic Chat colleagues: Dave MacDonald, Mark Webb, Helen Stubbs, and Alex Pierce.  I was surprised at this win.  Not that we weren’t worthy but that we were up against some of the best Specfic podcasts that Australia produces.  It truly was a great reward to a really good year of interviewing. My thanks goes out to the team - who may be able to tell me what I said in the acceptance speech because I have no recollection.

Before I had time to let that win sink in I was being called up again to accept the Best Fan Writer award for my body of work on this blog.  It was a very humbling experience, there was much dust in the air causing my eyes to water. I managed to thank my fellow nominees, and my readers.  So thank you again if you read this. Thank you very much.

The other category winners can be viewed here.  Congrats to all those who won.