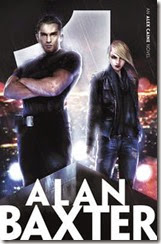 It’s great to follow a writer and see that hard work and persistence pays off.  Alan Baxter is one such writer and it was great news to see that he had secured a three book deal with HarperVoyager for the Alex Caine series.

Bound is the first book in the series and introduces us to Alex Caine, an MMA fighter who uses what he thinks are unique abilities to sense his opponents intentions before they act.  He fights in Sydney’s underground Martial Arts cage matches, coasting along, making a decent living until he’s approached by a mysterious Englishman named Welby, who suggests that Alex could do much more with his abilities.

A reclusive sort, Caine initially rebuffs (although rebuff is putting this nicely – Alex Caine swears like you’d think an illegal cage fighter might) Welby.  That is until a crime boss, who has lost money on Caine’s fight, makes a short holiday to London with Welby sound like a better idea.  What follows is an escalating adventure that mixes epic dark urban fantasy with thriller pacing.

Bound is noticeably different to Baxter's earlier series both in terms of craft and genre.  As I noted above the Alex Caine series is a fusion of thriller an Urban Fantasy. The pressure doesn’t let up the entire novel.  It’s a polished piece of work.  Baxter’s earlier works are more in the vein of horror/dark fantasy adventures. Bound feels like Baxter’s trimmed down the prose to fighting readiness and he’s come out swinging.

I’d compare this series to Jim Butcher’s work in terms of Urban Fantasy, though whereas Butcher riffs of hard boiled tropes, Baxter most definitely riffs of the thriller genre.  I also found Bound to be a little more adult in tone and delivery.  I am so thankful that HarperVoyager allowed the swearing and the dark fantasy/horror elements to come though.  Nothing worse than having a hard as nails cage fighter, talk as if he’s got a plum in his mouth.  The darkness, violence and sex might turn some readers off but I think Baxter and HarperVoyager are treating us as adults with this one and that’s refreshing, it’s not gratuitous but when you have flesh eating fey and bloodsports there is enough there to maintain our suspension of disbelief.

I imagine Jason Statham for the movie role.

This book was provided by the author.

You should be able to purchase Bound from all good bookstores and online from Booktopia.