Book Review – Hide me Among the Graves by Tim Powers 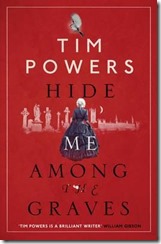 It was a disconcerting coincidence that brought this book to me and if I weren’t a skeptic and a rationalist I might be worried.  I had been researching the history of Speculative Poetry for a panel I was moderating at Continuum X and had of course come across the English poet Christina Rossetti, most famous perhaps for her poem Goblin Market, a snippet of which is presented below:

Lizzie met her at the gate
Full of wise upbraidings:
'Dear, you should not stay so late,
Twilight is not good for maidens;
Should not loiter in the glen
In the haunts of goblin men.

Now what I hadn’t put together was that Rossetti, was the niece of John Polidori, contemporary of the Shelleys, and Lord Byron and the first to pen the modern Vampire tale. This tied in nicely in my mind to the formation of modern speculative fiction.  You hear quite a bit about Shelley as the mother of modern science fiction, but not much about Rossetti.

Now this will not be news perhaps to historians or poets that love the Pre Raphaelite movement but it did put a smile on my face.

What has this got to do with Hide Me Among The Graves?  Patience dear reader, I am getting there.

So it was on the Friday morning before the convention proper that I chanced upon that most assiduous and talented publishing couple, Russell Farr and Liz Grzyb, in The Book Grocer.  After assaying a good many fine tomes at the ridiculous price of ten dollars, Russell handed me Tim Powers’ Hide Me Among The Graves, saying that I should read the book as it was one of his better ones. Note, at this time Russell had no knowledge of my research or panel.

The book was promptly packed and forgotten, to be read at some future date and to spend time next to another Powers title on my to-be-read-when-I-retire-from-reviewing pile.  It was not until the end of the convention, when I was awaiting takeoff that I read the blurb and discovered a slightly unnerving coincidence.

Hide Me Among The Graves, is a fictional account of the Rossetti family and their battle with an entity that puppets their dead uncle, Dr John Polidori. It’s a doorstopper coming in at just over 500 odd pages but what Powers has done in that space is… wonderful.  He’s managed to create a space in which I can enjoy several seemingly disparate interests.

We have a tale of horror that artfully mixes vampire myth and history with ancient and alien entities, ghosts and a subculture of other entities that commune with them (all aptly named with appropriate sounding working class slang), suppressed Victorian sensibilities and poetry.

Several of the characters, in fact I’d hazard to say, the majority of the major characters are real persons and poets. Powers quotes and borrows liberally from them for chapter beginnings and in the text.  It’s not often that a book ticks so many boxes and manages to stay on track as a story.

And that’s what I felt I got with Hide Me Among The Graves, a great multilayered layered story, brimming with verisimilitude. All of the genres that this book treads in are well trod and Powers has done what good writers do, take disparate ideas and forge them into something that appears new and wholly original.  If it’s not clear, this book makes me want to dig into gothic horror, classic literature and speculative poetry of the 1800’s all at once.

My one issue, one that was overridden by Powers’ skill, was the conceit that the poets and painters produced their best work only when possessed or influenced by the entity Polidori. The muse myth I hates it.

So if you abhor sparkly vampires and prefer subtle and unnerving portrayals of sensuality, if you prefer largely suggestive horror rather than gore then try it out.  Only one thing would make this better and that would be a movie of it directed by  Del Torro or J.A. Bayona

Booktopia has copies of the paperback for $17, I think my copy was the only one at The Book Grocer in Collins Street.