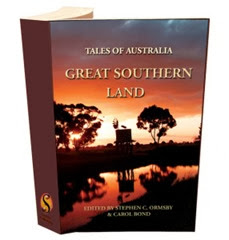 The first release from new publisher Satalyte,  Tales of Australia:  Great Southern Land, is a curious collection of stories.  This particular volume is  a mix of the fantastic and the mundane and on reflection I am not convinced that this was the best choice for the anthology or at least for some stories in the collection.

The anthology kicks off with a brutal reimagining of the history of the ill fated Batavia , in Disciple of the Torrent, by Lee Battersby.  I haven’t read Battersby before and if this story is anything to go by I’d be inclined to pick up more of his work.  It’s a dark and violent story (trigger warning) and I did feel uncomfortable at certain points,however,  if your thing is dark historical fantasy I think you’ll like Battersby’s take.

To go from Battersby’s gruesome story to This Corner of the Earth by Dean Mayes was a curious choice.  They are like chalk and cheese in tone and style.  I enjoyed Mayes’ writing but I’d been taken to the depths of human depravity by Battersby and Mayes nostalgic tale of a return to the narrator’s hometown, left me constantly waiting and expecting that a body or bodies would be found.  When they didn’t turn up I felt slightly deflated.

Acts of Chivalry by Sean McMullen, saw a return to the fantastic with a tale of a French werewolf on a rampage in a small town.  It’s a black comedy and once I clued into that fact the characterisation which had seemed overdone at first impression, made perfect sense - if you like the humour and dialogue present in shows featuring Simon Pegg, you’ll appreciate McMullen’s humour here.

Bobby, Be Good by H.M.C., saw a return to the mundane or realistic.  A slice of life piece about the young son of dead Bikie club president told from the perspective of the young Bobby.  At this point I was aware that the editors were alternating between the fantastique and mundane.  Bobby, Be Good I think suffers for its placement next to a comedy piece.  I felt that I just couldn’t get close to the character of Bobby and despite his losses and triumphs I didn’t engage with the character.

Charmaine Clancy’s After the Red Dust was a nice surprise that managed to reference Aboriginal myth and approach to land while providing a unique post apocalyptic Australia without resorting to cultural appropriation. It reminded me of Cat Sparks’ work in some respects.

The collection finishes on David McDonald’s Set Your Face Towards the Darkness and having read his work before, this story is a bit of a departure from his normal style.  It is written in journal format - the secret journals of explorer John McKinlay, who was sent to find Burke and Wills.  McDonald does a good job of capturing a reserved 19th century style in these entries written to McKinlay’s sweetheart, Jane.  I think the most challenging thing in writing fiction in journal and letter form, is building and maintaining tension and McDonald does this in his interesting mix of alternative history and pop culture horror trope. If you like Australian gothic horror and reading between the lines of historical journals you’ll appreciate Set Your Face Towards the Darkness.

Satalyte’s vision is to bring Australian writing to the fore, regardless of genre.  As I stated above I am not sure that that theme of Australian writers writing about Australia is strong enough to bind this one together.  It’s something of a liquorice allsort and I think my own preferences for the dark chocolate of the fantastic shapes my reaction to Great Southern Land - it was delicious in parts but confused my palate in others.

For the works that hit the spot for me, $5 seems a fair price for admission.

Note: The book was provided by the publisher