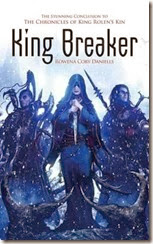 The Chronicles of King Rolen’s Kin was my first introduction to Rowena Cory Daniells and as such holds a special place, because I think Rowena is one of Australia’s best writers of adventure/grimdark fantasy and I have thoroughly enjoyed having the chance to read this and her later series, The Outcast Chronicles.

King Breaker rounds out a chronicle of four novels, plus a novella.  The chronicle is a tale of the fortunes of the royal family of Rolencia after their parents and the heir to the throne are murdered and the crown usurped.

In King Breaker, Byren, the remaining heir has managed to defeat the invading army and is betrothed to the Myrofinian Queen, the 15 year old Isolt.  So technically he is now king-in-waiting to the country that invaded his own; while the bastard, Cobalt the Usurper, sits on the throne of Rolencia.  The Merofynian nobles, like all self centred aristocracy resent him and when he has to leave his younger brother Fyn (who has developed feelings for Isolt )as Lord Protector, the scene is set for some opportunistic politicking and potential family feuding. Piro the youngest, continues her adventures as the Mage’s apprentice and manages to almost shake her reputation for putting her foot in it.  We also see the return of Garzik, Orrade’s brother, who struggles with loyalty to Rolencia or the Utland raiders.

I felt more keenly than ever, the tension in the interpersonal relationships in this novel.  Indeed much of the fighting, much of what would usually be set battles is glossed over fairly quickly. That’s not to say there isn’t action, but that of the three or four large battles that took place, most were quickly resolved or happened off page.  One of Daniells’ strengths though, is making you care about the characters and she is equally well versed in placing them in physical or emotional danger, so don’t think a lack of gutsy battles is going to give you an easy ride.

If I had to find fault, I did feel in a couple of places that Daniells may have had to cut material too sharply.  King Breaker is the largest book in the series, coming in at 774 pages and there were two distinct points that I felt that Daniells’ usual style felt a bit truncated i.e. she had to cut harshly to get the page count down.

I  would suggest that King Breaker could have been two(if we ignore the realities of publishing) or maybe three books.  I certainly think there were enough subplots to continue without padding the tale out.  But that’s a minor quibble and to be fair I think Daniells has done a brilliant job of wrangling the material down into the one tome to round off the tale.

King Breaker has all the qualities that I have come to expect of the series – excellent pacing, interesting interpersonal relationships and a good portrayal of a gay character in Byren’s companion Orrade.  The King Rolen’s Kin chronicle is a nice introduction to Daniells’ work and when you have recovered from the rollercoaster ride I suggest you take up the Outcast Chronicles which I think is grittier and better paced than Game of Thrones.

Note: The King’s Man novella is only available as an ebook, and while not necessary to read before embarking on King Breaker, it will enhance your enjoyment.  It’s also one of the best novella’s I have read over the past two years – see my review here.

This book was provided by the author.

Australian’s can purchase the entire series through Booktopia and if you use the following code ( EARLY) midnight Saturday(November 9) you can get free shipping.

To purchase the ebook novella The King’s Man you will have to look online at Amazon, Kobo, or Rebellion