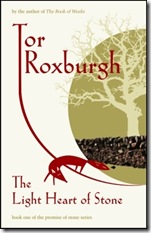 The Light Heart of Stone by Tor Roxburgh is quite simply a beautifully wrought and original tale. It is a fresh and compelling read on a number of levels.

Young Fox is an Indiginy daughter born in the Kelp province, in a land called The Stone Body.  The Indiginy tribes live under a treaty enforced by the descendants of a 1000 year old invading force.

The colonising forces are split into houses named after their produce, with each house administering a province. These houses are lead by Compionarii, women who have “gravity” or the ability to make the land abundant even out of its natural cycles.

Fox is tested by one of the Companionarii and found to have talent. She is taken from her family and administered drugs to stunt the growth of her rockskin. -an Indiginy feature akin to a crystalline bark. Fox is to become a hopeful in the continued breeding of Companionarii talent and gravity in the house of Oak.

The Comanionarii however, are failing, failing to pass on gravity or losing their gravity entirely.  Their harvests are slowly beginning to fail. Refugees flood the capital and the situation drives some within Companionarii culture to seek shocking solutions.

Meanwhile the Stone Body has ideas of its own. The treaty that has kept the colonisers in power and the Indiginy servile comes under threat as the land works its own magic.

A brush with our own history

I won’t say that this book could not have been written by anyone but an Australian, the story will hold a mirror up to a number of cultures with colonial roots.  There are, however, features of this novel that do seem to resonate with Australian Aboriginal concepts of land and their relationship with it.  There’s also somewhat of fleeting reminder of our more modern treatment of refugees.

I think it would be fair to say that Roxburgh’s knowledge and understanding of Australia’s indigenous history and culture has informed her fantasy and given the reader a chance to come at various issues and themes from a safe distance. Indeed it’s possible that some may not notice this feature at all due to Roxburgh’s excellent crafting.

While I am a fan of somewhat traditional, trope filled European epic fantasy, it is refreshing when someone pops up on your radar and gives you something new. Sure there are many elements within The Light Heart of Stone that will be familiar – the Houses tend to be named after common agricultural produce like Rice, Wheat, or Oak and the protagonist is known as Fox.  There are, however, Twist trees that devour animal flesh, Orange grasses that produce a narcotic effect, and Torchwood trees that burn the skin.

There are also nice little surprises like the Indiginy method of story telling and knowledge gathering called The Four Stories, which has anthropological verisimilitude.    The magic system also tends to be more folk story based, in the sense that it is lightly explained.  A far cry from the sort of magic a reader might find in the works of Rothfuss or Sanderson.

I liked the contrast between the Companionarii dual gendered god and the Stone Body, loosely comparable to Christianity versus Indigious beliefs, but certainly not an ‘insert thinly veiled Catholic Church here’. I also enjoyed the development of aphorisms ad blasphemies that hinted at earlier religious occurrences or histories.

There’s issues of ecological catastrophe and a mounting refugee problem which echo current political climates in a number of countries, but certainly in Australia.

The Light Heart of Stone abounds in strong female characters (good and evil) .  The Companionarii are matriarchal, the Indiginy more patriarchal but nowhere is this really a focus of attention.  In essence  we have a female positive tale but not at the expense of male characters or the male reader.

I don’t know the decision behind the decision to self publish The Light Heart of Stone.  Tor is a practised and traditionally well published writer of both Non-fiction and Fiction outside of the Fantasy Genre.  That experience shows in her work here.

I don’t want to make any predictions, but there is something special here and if your eager to experience something new, something that feels substantial then I can heartily recommend the book. I am frankly surprised that she hasn’t been snapped up by HarperCollins/Voyager.

This book was provided to me by the publisher at no cost to myself.