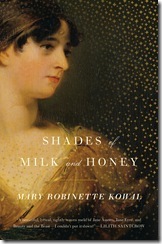 Shades of Milk and Honey is the first in a series of Regency Era novels with magic.  Kowal’s debut novel, it was nominated for the 2010 Nebula1 Best Novel category.

Kowal is no newcomer to awards, she also received the Campbell Award2 for Best New Writer in 2008 and received Hugo3 nominations for her short work, including talking out the Hugo with her short, For want of a Nail.

So what do you get when you mix a talented speculative fiction writer with the Regency Period?  Shades of Milk and Honey been likened to Pride and Prejudice meets Jonathan Strange & Mr. Norrell or Austen with magic.

While that gives you an idea of the type of book it is, it does define the novel in terms of other works. While I understand the need for catchy marketing, it does not do justice to the work itself.
So in answering my own question, what do you get? A delight.  Now I will admit that I am a fan of Austen and works set from the Regency era on to the Victorian.

Shades of Milk and Honey is an intimate portrait of Jane Ellsworth, a woman ahead of her time in a version of Regency England where the manipulation of glamour is considered an essential skill for a lady of quality. But despite the prevalence of magic in everyday life, other aspects of Dorchester’s society are not that different: Jane and her sister Melody’s lives still revolve around vying for the attentions of eligible men.
Jane resists this fate, and rightly so: while her skill with glamour is remarkable, it is her sister who is fair of face, and therefore wins the lion’s share of the attention. At the ripe old age of twenty-eight, Jane has resigned herself to being invisible forever. But when her family’s honor is threatened, she finds that she must push her skills to the limit in order to set things right–and, in the process, accidentally wanders into a love story of her own. [source]

Kowal, like the director of a good Austen dramatization strikes the right chord in presenting regency mores and dialogue without trying to mimic Austen’s style exactly.  It prevents the work coming across as a pastiche and makes entry into the regency world a little easier for the less dedicated regency reader.

Some examples will illustrate:


The Ellsworths of Long Parkmead had the regard of their neighbours in every respect. The Honourable Charles Ellsworth, though a second son, through the generosity of his father had been entrusted with an estate in the neighbourhood of Dorchester. It was well appointed and used only enough glamour to enhance its natural grace, without overlaying so much illusion as to be tasteless. His only regret, for the estate was a fine one, was that it was entailed, and as he had only two daughters, his elder brother’s son stood next in line to inherit it. Knowing that, he took pains to set aside some of his income each annum for the provision of his daughters. –  Shades of Milk and Honey


The family of Dashwood had long been settled in Sussex. Their estate was large, and their residence was at Norland Park, in the centre of their property, where, for many generations, they had lived in so respectable a manner as to engage the general good opinion of their surrounding acquaintance. The late owner of this estate was a single man, who lived to a very advanced age, and who for many years of his life, had a constant companion and housekeeper in his sister. But her death, which happened ten years before his own, produced a great alteration in his home; for to supply her loss, he invited and received into his house the family of his nephew Mr. Henry Dashwood, the legal inheritor of the Norland estate, and the person to whom he intended to bequeath it. In the society of his nephew and niece, and their children, the old Gentleman's days were comfortably spent. His attachment to them all increased. The constant attention of Mr. and Mrs. Henry Dashwood to his wishes, which proceeded not merely from interest, but from goodness of heart, gave him every degree of solid comfort which his age could receive; and the cheerfulness of the children added a relish to his existence. – Sense and Sensibility

Kowal gives you all the things that you love about Austen, the banter, the mores, the misunderstandings and then she seamlessly adds magic or Glamour,as it is called.

So well is Glamour woven into the story, so well is its practice and place within regency society portrayed, that instead of jarring the reader as some might find with works such as Pride and Prejudice and Zombies, it flows and enhances the various tropes of regency romance.


Jane took the folds between her fingers and thinned them to a gossamer weight which she could barely feel. When she stretched them out, they spanned the corner in a fine web. Once she anchored the folds to the corner, the glamour settled into the room, vanishing from view. The gentle scent of honeysuckle filled the air, as if from a sprig of flowers. It took so little effort that she barely felt light-headed.

Glamour (the creation of illusion for artistic or cosmetic effect) is integral to the novel without seeming so and I think that is Kowal’s greatest achievement with the book.
For those readers out there who think “Pah! romance who needs it” .  Well Shades does have romance, but there’s action, duels for honour and really… everyone needs a little romance.  I found myself sitting on the edge of the seat unable to put the book down, in much the same way that once I start watching Pride and Prejudice (Colin Firth/Jennifer Ehle) I lose 6 hours of my life.
There are characters who remind us somewhat of our Austen favourites, Mrs Ellsworth shares some characteristics with Mrs Bennett, especially her nervous disposition.  This is handled well though and I see it as somewhat of a polite allusion to Austen.

I would recommend the book to fans of Austen as I think Kowal has captured the drama and feel perfectly.  For fans of speculative fiction Glamour is a perfect example of a thoroughly thought through and implemented magic system that doesn’t have roots in Tolkien or Dungeons and Dragons.

In an era where some authors think it is a good idea to put Zombies into Austen or to cut explicit sex scenes into Bronte.  It is refreshing and inspiring to have a talented author add something of worth to the genre.

My only disappointment with this book was that it ended and for some reason I have yet to discern, the sequel Glamour in Glass is not available for sale as an ebook in Australia4 .

I have had to order the hardback, and I can’t tell you how much it vexes me to know have a broken set- one ebook and one hardback. Vexes me, I say.

Thank you Miss Kowal, you keep writing them and I'll keep buying them, in whatever format I can.


1. The Nebula Award is given each year by the Science Fiction and Fantasy Writers of America (SFWA), for the best science fiction/fantasy fiction published in the United States during the previous year. [source]↩
2. The John W. Campbell Award for Best New Writer is an award given annually to the best new writer whose first professional work of science fiction or fantasy was published within the two previous calendar years.[source]↩
3. The Hugo Awards are a set of awards given annually for the best science fiction or fantasy works and achievements of the previous year[source].↩
4. Neither does it appear that Shades is available as an ebook anymore ↩
Did you enjoy this review? Would you like to read more? You can subscribe to the blog through a reader,by Email or Follow me on twitter.
Posted by Sean Wright at 4:27 PM