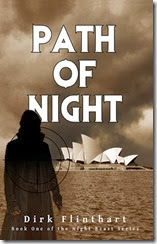 Imagine if you will, the literary love child of Roger G. Barrett and Kelley Armstong and you’ll get close to the performance that Dirk Flinthart has provided in Path of Night

It’s not as politically incorrect as Barrett’s Les Norton books but there’s a thick seam of true blue Aussie gold humour running through this book.  Mesh this with something like the fast paced urban fantasy of Kelly Armstrong’s Otherworld series, sans the really supernatural shenanigans and you have a darkly humorous thriller with cracking one liners and plenty of action.

Michael Devlin is the first of a new breed. The way things are going, he may also be the last.

Being infected with an unknown disease is bad. Waking up on a slab in a morgue wearing nothing but a toe-tag is worse, even if it comes with a strange array of new abilities.

Medical student Michael Devlin is in trouble. With his flatmates murdered and an international cabal of legendary man-monsters on his trail, Devlin’s got nowhere to hide.

His only allies are a hot-tempered Sydney cop and a mysterious monster-hunter who may be setting Devlin up for the kill. If he’s going to survive, Devlin will have to embrace his new powers and confront his hunters. But can he hold onto his humanity when he walks the Path of Night?

Path of Night also puts me in mind of fellow Australian writers Trent Jamieson, Jason Nahrung and Narrelle M Harris. Jamieson's Stephen de Selby, in the Death Works series, is a similar character to Devlin - a reluctant hero, though Devlin is less self effacing.   Nahrung and Harris have also recently provided us with different takes on the Vampire in an Australian setting.

And what a well tilled field vampire fiction is.

So what makes Path of Night  different? What lifts it out of the surge and swell of competent and not so competent reinventions of age old myths?

In this instance probably pacing and humour.  I can experience an aversion to Australian humour if its put on a bit strong(cultural cringe maybe).  Flinthart managed somehow to circumvent this aversion and I think a may have even chuckled out loud once or twice - trust me this is a feat of Herculean proportions.

The pacing is tight as well, the action (which can be grizzly in its conclusion) is crisp, clear and plays well with the humour.  Towards the end of the year I am often starting to hit that wall of reading and commenting fatigue and Path of Night  managed to punch through that wall for me.