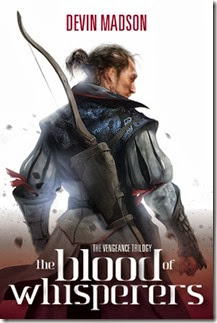 Should a book review be just about the text between the covers?

Blood of Whisperers is the debut novel from Victorian author Devin Madson.  It’s the first in a trilogy of novels set in the pseudo-Japanese fantasy world of The Imperial Expanse of Kisia.  What drew me to this particular novel is the way in which the author sought to bring us this tale.

The Blood of Whisperers and the following books, The Gods of Vice( due December 2013) and The Grave at Storm’s End are already written and edited.  I hold the paperback of book one in my hand because Madson chose to fund the book’s production through a Pozible campaign- a nail biting experience if the author’s notes on it are anything to go by.

It’s a bold step putting yourself out there as a relative unknown, hoping that people will support you on an example of your writing.  In this instance it paid off, raising $8000 dollars for three books to be produced to a professional standard(art, editing,distribution etc).

I hold a book in my hand that is indistinguishable from many commercially(ie traditional publisher) produced books that grace my shelves.  It bears distinctive artwork by artist Viktor Fetsch, whose work also graces the cover of Brandon Sanderson’s German translation of The Emperor's Soul and Sarah J Maas’, Throne of Glass.  The cover design by Isabelle Young you can judge for yourself, but I think it compliments Fetsch’s artwork.

All in all, it’s a quality container for the tale within.

A man of common blood sits on the throne. At his command the last emperor was executed, but now the empire is on the brink of war.

Endymion is an Empath. He was born with the ability to feel another’s emotions and reach inside their hearts for their deepest secrets. Often despised he lives a nomadic existence, but when he finds himself imprisoned for sorcery and facing death, it is his past that will condemn him. Born Prince Takehiko Otako, the only surviving son of the True Emperor, Endymion is already caught in the brewing storm. Fast losing control of his Empathy he seeks revenge against the man who betrayed him, but for Endymion the truth will come too late.

The Blood of Whisperers is a tale feudal infighting and political manoeuvring with some interesting psionic magic thrown in for good measure.  Endymion is pushed forward as the main protagonist of this tale, but the structure that Madson has chosen to frame the story with really gives us three from different factions.  The tale is told in the first person, giving the reader a certain immediacy, a closeness with the the character who is describing events.  We are introduced to Endymion first, then Lord Darius Laroth, minister of the Left and finally Captain Regent, the right hand man to the rebel, Monarch.

Madson gets around the confusion generally caused by “head hopping”  by prefacing each chapter with an insignia that signifies that character.  It’s an interesting choice, in line, I think with the setting.  How you find the setting will I think depend on your own preferences.  This is very much a tale focussed on the story. There’s a broad sketch of the psuedo-Japanese setting, enough to give you a general idea, to evoke a flavoured background for the characters.  If you are looking for an in depth interrogation of culture I’d suggest you look elsewhere. In essence the story could be set in a feudal European setting and not suffer for it. This is not a criticism mind you, merely a sign post that the story carries more of the weight in this novel.

Madson’s writing is solid, the tale is well paced and the plot suitably intricate enough to carry most reader’s interest to the end.  There were a couple of scenes that I thought were almost cliché, in the sense that I realised (due to prior exposure) ahead of time that the writer was attempting emotional manipulation. That being said, those are really minor quibbles from a reviewer that has a lifetime of fantasy reading under his belt.

As a debut novel it’s better than some of the traditional “best sellers” I have read over the last 12 months. Madson tells a well paced entertaining tale. I am curious whether or not she had attempted to go the traditional publishing route because I think it would have done well with fans of Trudi Canavan, and Kylie Chan - I think they share similar target audiences.

If you are a fan of political fantasy. if you like a Game of Thrones but don’t like the brutality or the potential of every character ending up dead then, I recommend The Blood of Whisperers. It’s a comfortable read – an enjoyable and intriguing story that I would like to follow up in The Gods of Vice.

The paperback can be purchased direct from the author at this time and Devin is currently offering Free postage worldwide. Purchase Paperback

Ebook versions can be bought via Amazon or Smashwords