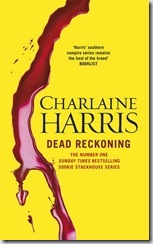 Dead Reckoning is the 11th book in Charlaine Harris’ immensely successful Southern Vampire Series, that has been made into the very successful True Blood Series by HBO.

I am a fan of the HBO series, I love the return to the sensual, seductive and debased nature of the Vampire of myth.  I like the twang of the bluegrass music, the decay and the parody of hick culture(well maybe it’s not a parody).  I have never read Charlaine Harris before, but with a solid love of True Blood , Dead Reckoning should have been right up my alley.
It wasn’t, not quite anyway.

The Story
Dead Reckoning reads much like the “continued adventures of Sookie Stackhouse”, the main plot revolves around getting involved in an internecine vampire plot to kill off one of the nasties in the Vampire hierarchy. Harris also reveals a bit more of Sookie’s fae background and the adulterous relationship her grandmother engaged in with a member of the fairy realm.

Read the books first?
There were two things that worked against my enjoyment of the book and both relate to my love of the TV show.

First I found Sookie to be a little less believable in the book than her portrayal by Anna Paquin in True Blood; she seems to be able to recover a might too easily from being firebombed, beset by thugs, chased by a deranged killer, and quite okay with killing and disposing of bodies and hatching a plan to kill a powerful vampire and his entourage.

All in a day’s work for our telepathic waitress.

The second issue was, being book 11, the plot has advanced far beyond my watching of the show (Season 2) and there was  a small disconnect in finding out that Bill is no longer with Sookie and the story has broadened to include fairies and elves, (which doesn’t happen until Season 3 of True Blood) and it struck me as a bit disappointing as the “world” began to feel like a bit of a Mulligan stew.
But put aside my fraying sense of disbelief and the preconceptions generated by True Blood and the book is well paced , light,  and entertaining read.

Note: This book was provided by the publisher at no cost to myself.
Did you enjoy this review? Would you like to read more? You can subscribe to the blog through a reader or Follow me on twitter.
Posted by Sean Wright at 1:11 PM