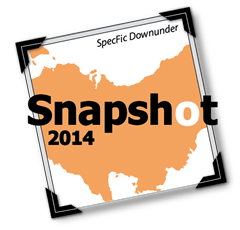 The most recent cover work of yours that I have seen is for Jo Anderton's Guardian, which everyone I have spoken to is enamoured of. What are you currently working or if it's embargoed perhaps you could tell us what it was like creating a cover for a series that already had a certain visual style presented in the first two books?

Guardian was an absolute joy  to work on and I’m thrilled with how much love it has received.  Initially when I was asked to create the cover the brief did say it was to keep in theme with the last 2 books and my original compositions were very similar to that.  But as my preliminary sketches evolved after reading the novel extracts I started to explore different looks and compositions.  Fablecroft and Jo were very receptive to the idea and with a few minor tweaks here and there I created the final piece.

I knew it had to be as striking as possible to grab a readers attention but it was the essence of the characters journey that had to be the defining imagery.  Its sort of a montage of an actual moment in the book as well as a metaphor for what the character is going through, her struggle to hold herself together.  The concepts of her very  form decaying against the background of this decrepit mega city  are amplified by this giant burning sun on the horizon.  Visually I wanted that sun to create a focal point that just pops out at the reader and won’t be missed anywhere no matter how small the image is on a web page, or where ever the book may sit on a shelf.  It just draws the viewer in, drawing them closer to explore Guardian.

In between the odd cover assignment, advertising work and commissions,  I’m working on a few of my own paintings and a cavalcade of comic books I’ve written.  At this very moment I’m working on a story called The Dreamer.  The whole story is told visually and there is no dialogue.  I’m exploring this idea where dreams seem so real when you are in them but if you think about it some pretty bizarre things happen that logically just can’t be true.

I am delighted to find that you are responsible for some of my fave small press covers but you have also worked with large publishing houses. What are the similarities and differences in working for these different sized operations?

Whether I’m working on small press or well established I treat every client the same, however the initial process might differ but the ultimate goal is to create a design that’s going to sell the book.  If working on a small press project I’m always thinking this could be the defining book for this publisher,  how am I going to make it stand out from the crowd.  And I think its just natural for all creative types to think that what you’ve made could be that defining piece.

The most obvious differences would be budget.  Small press may only be a few hundred dollars whereas larger companies might pay a thousand or more.  Yet I never let this define the quality of the piece.  I’ll always provide the best quality  I can within what I have to work with.

The amount of input involved.  Larger publishers could have up to 20 people look over your work before its approved and that may not even include the author.  Smaller publisher you may  only be dealing with 2-3 people or it might be even as simple as you’re just conversing with the author.

The defining similarity is the absolute dedication everyone has to the project.  Take Jo’s Guardian as an example, when I received my  copy of the book you can just sense the love that went into that book.  The quality  of the printing is exceptional, it feels great to hold.  The design and layout along with the cover image looks so soft and warm.  It sits on the shelf in my studio like a warm fireplace.

Perseverance and talent has given you an interesting career path, perspective drawing for architectural firms, freelance cover and internal illustrations to name but two stops on the journey. What would you like to do that you haven't had the chance to yet?

I would really like to start publishing more of my own stories.  I’ve had 3 so far and it was a great experience.  But I’m itching to create more, I’ve been hinting at a few pieces on my blog every now and then, things like Arid and The Dreamer which are all stories told predominantly with just pictures and either very little or no dialogue.  That is something I’m very keen to explore along with a few other comics I’m working on, one of which is called I fight the city.

Posters are something else I would like to explore.  Many years ago I worked on a few band posters and CD covers.  They were great fun and its an industry I would like to get back into again especially now Australian music has some great bands creating some really interesting work.

Currently I’m reading Jo Anderton’s Guardian and it is awesome.  And I really liked the Guy Pearce film, The Rover.

Have recent changes in the publishing industry influenced the way you work? What do you think you will be producing in five years from now?

Digital publishing has definitely changed the way I work.  I can create a lot of my  own content for the web and market that to specific audiences around the world.

And because books are no longer constrained to just printed matter often publishers now ask for internal illustrations for a novel which does increase the amount of work available.  It is a real win-win situation for the reader and the creators.

The downside is a lot of printing firms are finding it hard to stay afloat due to the lower levels of printed material. But ultimately when you create a book the goal is to have a physical copy of that book that you can sit and immerse yourself with.  The initial rules of publishing may have changed but the final product will always be there whether its in hard copy  digital, audio, or whatever else may come along.

Dion lives in New South Wales, Australia and has been providing commercial artwork for publishing, advertising and marketing agencies nationally and worldwide.

While studying Advertising, Design and Marketing at Curtin University he found an interest in painting with acrylic. After university Dion studied Fine Art and Graphic Design at the Metropolitan College of TAFE in Western Australia to hone his painting ability. It was in his final year of study that he began working for local building firms as an Architectural

In early 2000 Dion began working for publishers as a freelance artist working on various projects for children’s books and magazines.

To date Dion has provided work for some of the worlds top publishers such as, McGraw Hill, Macmillan, Little Hare Books and Blake publishing.