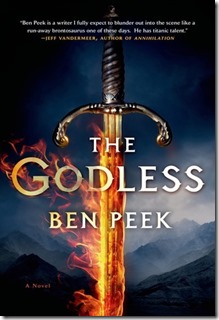 It’s a big step moving from writing condensed, powerful and original short fiction to a multiple book, epic fantasy.  As different as say running a 5km run and a marathon.  In each case you use the same skill but the end objective, your tactics, how you cross the finish line or complete the work is different, enough to challenge the best runners or writers when they are used to one kind of event, one format.

So how did Peek fare?  He’s a very good short story writer (see Dead Americans) and The Godless is an epic in every sense of the word.

Granted a trilogy is not an uncommon sight on fantasy shelves but I get the sense that in some at least there’s a fairly straightforward structure designed to move the story along, hook in readers who will become loyal – an understanding if you will between commerce, story and entertainment that produces an easily digestible product, where the text is transparent.

Then there are books like The Godless that I think need the space for the scope and definition of the storytelling.  The Godless is an epic, not just in terms of size but in its selection of characters and its apparent scope.

The city at the centre of The Godless, Mireea, is built on the back of a dying god and for a significant part of the story I was unsure whether of not this was a metaphor, a creation story, for the gods as described seemed more of that ilk, primeval forces with human characteristics but godly dimensions.

Then we have the Children of the Gods, humans gifted with longevity and power, humans that become immortals and whose life and power produce curious responses: a godlike ruler of animals, a reclusive enclave of detached natural philosophers, a crazed killer of nations.  Then there are the “cursed”, those unfortunates blessed with elemental fragments of the god’s powers who are either shunned because of the differences or are killed by their inability to control the powers they hold.

What happens to a world existing in the twilight of the god’s powers when a new god appears, is the big picture The Godless series will attempt to answer.  But threaded through this epic tale are personal stories, personal tragedies that help to ground it.

It’s these personal stories, the characters that they spring from that I found most interesting, especially for the genre of epic fantasy.  We still have our sword and sorcery, our big battles, our scarred veterans and our young characters who we will follow on their journey.  But Peek has I think made some original and diverse choices in building and filling his world.  Our principle protagonist is not white, and not male - Ayae is an orphan, a refugee who up until our introduction to her  has made a successful transition to being the apprentice of a renowned cartographer.

Many authors paying lip service to diversity may have stopped there but Peek provides us with a diverse cast and that diversity is three dimensional - the ruler of Mireea, is a shrewd woman of middle age with the associated changes in body and shape that it brings for many of us.  The leader of “Dark”, a bunch of mercenary saboteurs, is an exiled black nobleman and the invading army of nationalistic Leeran’s, is white.  Men and women appear evenly in positions of power.  Now I am sure that some sections of the science fiction community might rail against such blatantly fair representation.  Me, well I see diversity done skilfully, diversity and originality that enhances story.  When your characters feel like real people more so than archetypes then I think the reader finds it harder to slot them into well worn parts, into literary set pieces that they have long grown used to reading and anticipating. Diversity created interest, which kept my immersed along with Peek’s writing style.

Peek’s writing asserted itself from the outset, I was very conscious of his style being an important part of the storytelling, of creating a sense of place and a mood. Some writing fades into the background, let’s the story do the heavy lifting.  What I found in The Godless was a very good mix of fresh story and styled prose.

Slowly, Mireea was becoming uniform: a city of shut buildings and empty lanes, the divisions of economy washed away and falling into memory like the sprawl of markets. Each new building shut up was a part of Mireea lost, and soon he would also be gone. If he was not, he ran the risk of being drawn into the units that the Mireean Guard were making from citizens. That he had no desire for.

If you are looking for a page turner I am not sure I would classify The Godless as such, which is a good thing.  I think you need to devote a bit more attention to it.  This is the first of a great epic and I get the same sense of immersion and depth of history that I got when reading A Song of Ice and Fire.  I want to know more about these characters, because they are fully realised and I can’t sate my curiosity by falling back on archetypes

So how did Peek fare?  Very well.  If you want to enjoy what is possible to achieve when you look outside the standard fantasy tropes give The Godless a go.

The e-Arc was provided by the publisher.