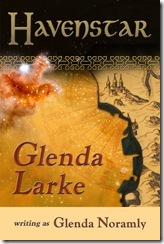 Havenstar has a history, a bit of a sad one.  It was Glenda Larke’s (writing as Glenda Noramly) first novel, released in 1999 under the then Virgin books SF imprint.

It raced up the Amazon charts(getting to 81 on the general list) only to be orphaned and out of print as the publisher imploded.

Thankfully Glenda was made of stern stuff and has gone on to release another 9 novels with more on the way.

She decided to re-release Havenstar as a self published eBook.  No longer do fans have to contemplate inflated prices of paperback copies on Amazon (of which none of the money is seen by Glenda), it’s now  available from a number of digital outlets.

The Eight Stabilities are islands of order surrounded by lethal chaos—and the order is being swallowed by the unstable. The religious leaders of Chantry try to maintain the Stabilities by ordering the necessity of a once in a lifetime pilgrimage across the chaos. And in that ever-changing world, the most important person is a mapmaker who can make a chart of secure pilgrimage routes…

Keris Kaylen is a mapmaker's daughter. When her father is murdered and a mountain disappears, Keris is betrayed by her brother. Forced to flee into the Unstable, she finds her safety is in the hands of a man bonded to the Lord Carasma, the Unmaker…and her ordered life is turned upside-down. Her survival will depend on a map and a place called Havenstar—but she can't reproduce the map, and Havenstar may not even exist…

Havenstar is a debut novel and to be expected there were some sections where I felt  characters voice and register were a bit inconsistent.  That’s really nit picking though, what is a rather original piece of fantasy writing.  A strong female character and mapmaker as lead, an interesting mix of religion and magic.

I think Havenstar still stacks up against anything current in fantasy and exceeds quite a few in execution and concept.

It feels familiar in places – a society controlled by the church and its Rule and exotic in others with the concept of the unstable and the unmaking of the world.  There’s enough of a touchstone for a reader of the heirs of Tolkien that you won’t feel lost and enough fresh concept to reinvigorate you reading.

It’s a stand alone book for those with an irrational fear of trilogies (or a lack of time) and a great introduction to Larke, who seems to me to be somewhat of a hidden gem in Australian Fantasy writing circles.

If you are looking for some quality fantasy writing to fill your ereader after Christmas then try it out, I don’t think you’ll be disappointed.