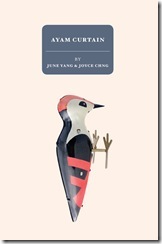 Ayam Curtain is an elegant book, in conception, construction and content. A delight to read and perceive. It’s one of those joyous books that is a work of art because of the words on its pages and how those pages are presented.

I first became aware of the project after stumbling across one of the editors, Joyce Chng(@jolantru) on twitter. She, as well as all the writers in the collection are worth checking out - from the Alvin Pang’s to the Clara Yeo’s.

I rarely give out 5 star reviews, generally a work has to really hit me emotionally or be doing something clever or original.

Being a collection Ayam Curtain doesn’t carry the emotional punching power of a novel, but there are pieces that peck at my emotions, stories that that flit in and out of my perception, evoke memories and images that fade with beat of tiny feathered wings.

Ayam Curtain is split into two distinct parts, the first, Speaking Bird Language or kong jiao wei (translated as a cock and bull story, a flight of fancy), is a collection of micro fiction that gives the reader short fluttering glimpses of alternate Singapore.

They can vary wildly in construction and tone from JY Yang’s Interview (which is lucky if it’s more than 100 words long), which manages to cover class, control and language as an inhibitor, to, They called me the hyacinth girl by Victor Ocampo, a haunting passage of a Crow’s flight.

Dejected, rejected it returns to the parliament of trees, the ninth circle of hell where Indian Troops sing to the dead of Changi: Manasu marugudhey, manasu marugudhey

Yet the sum is greater than its parts, with each of the small pieces forming a cacophony of bird calls that seems to have a distinct sound about it, nostalgia seems to perch easily, side by side with perceptions of the future.

The second part of the book, The Ayam Curtain, features longer works of up to 1000 words.  The effect is much the same, diverse tone and style but with an overall synthesis that gives a tangible sense of speculative Singapore.

Woodwind by Clara Yeo points a feathered wing at Singapore’s deforestation, as a young child imagines that she can hear the story of a Rosewood table. While JY Yang posits the real reason for SMRT train breakdowns in The War going on Beneath Us.

The intention of the collection was to

all under the larger wing of speculative fiction.  The editors have achieved this vision.  I step away from the book with a number of new (to me ) writers that I want to follow up and a tangible sense of the issues that are foremost in the minds of the speculative fiction community of Singapore.

This book deserves wide circulation.  I encourage you to purchase and enjoy.  To enrich your literary experience with the birdsong than is Ayam Curtain.

This book was a gift borne on steel wings, from the Lion Fish City.  You can purchase it from Books Actually, Singapore’s number one independent bookstore.