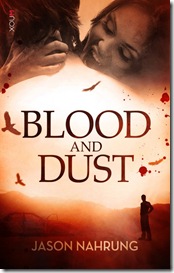 Blood and Dust is the just released Australian Vampire novel by dark fantasy author Jason Nahrung.  If you’ve just obtained an ereader recently and you like your vampires dark, sensuous and dangerous - buy it.

I am a fan of Jason’s short fiction, where he manages to infuse old tropes with a distinct aussie flavour, something that goes a bit deeper than location and slang.

Nahrung’s a Queensland country boy, though he now lives in the big smoke and there’s a bit of that country sensibility that comes through in the writing, an attitude, a perspective.

The tale centres around Kevin, a mechanic in his parent’s servo in a dying town in outback Queensland.  Kevin looks set to marry his girlfriend, inherit the servo and maintain the status quo until, by an unlucky twist of fate, he becomes embroiled in a turf war between two vampire clans The Von Schiller Organisation and the Night Riders, a vampire bikie gang.

What I really enjoyed about the novel, aside from the action driven story was Jason’s infusion of Australian flavour, subtle enough to avoid cultural cringe, consistent enough to deliver a tone or mood that is distinct.  There’s an acknowledgement of Aboriginal history, of stolen generations. There’s an observation of country life that most rural Australian’s would have no trouble recognizing.
Bringing a European myth into an Australian setting, especially a rural one and having it stick is, I think, a considerable hurdle.  It’s quiet easy for me to imagine vampires in the cities of Melbourne and Sydney for example but not so much in the “Sunshine State”. But Jason has done it and done it well.

I shake the red earth from my hands as I put the book down and dream fitful dreams filled with the roar of Harleys, the smell blood and Bon Scott singing Highway to Hell.
Give us some more Jason, to slake our thirst.

The book was provided by the author you can purchase it through Xoum and other digital outlets. Clandestine Press who have brought the work out in eBook and Paperback formats here. The sequal, The Big Smoke is also available.
Did you enjoy this review? Would you like to read more? You can subscribe to the blog through a reader,by Email or Follow me on twitter.
Posted by Sean Wright at 1:36 PM