Guest Book Review - The Book of Rachael by Leslie Cannold 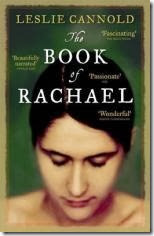 It feels a bit incongruous; me, a guy, writing a guy's take on a book explicitly dedicated to women. The risk of mansplaining or taking things down a side-road not withstanding, I'll go one step further and dedicate this review to male lovers of literature.

The Book of Rachael is a work of historical fiction set two millennia ago, told from the perspective of Rachael, the sister of a certain fellow destined for martyrdom. And it's through the experience of Rachael, her sister, her mother and the various women of the text, that you'll find yourself in new territory. More-so if you're a bloke.

Now, if you're a beneficiary of male privilege, odds on there's leeway you'll be sharing with your fellow penis-wielders – all without much in the way of a second thought. If you can, why can't they? Only fair, right, not to deny the same for your mates? Too easy.

So how far do us guys extend this tolerance to authors without the sausage and meatballs? If you're a progressive type, you're most likely, at least in theory, to aim for some kind of gender balance. Perhaps you'll even be offended at any suggestion to the contrary, you good righteous progressive, you.

In this respect, reading The Book of Rachael trained a surgical light upon the dark recesses of my hypocrisy. I'll digress.

I came to Leslie Cannold's book with Michael Moorcock's Behold The Man in mind as a kind of benchmark; a book by a guy, about a guy who travels through time to find Jesus. But instead of a successful pilgrimage, Moorcock's protagonist fumbles through various licentious adventures, including an attempt at sex with the promiscuous Mary (failing to get it up thanks to an onlooking idiot-Jesus), before accidentally becoming the Christ of lore himself.
Pulp as it may be, Behold The Man is one of my favourite books, and I've never so much as flinched while reading it. Yet it wasn't The Book of Rachael that ended up being tested against this benchmark. Rather I found myself as a reader being tested through my questionable application of the intended standard.

Amidst Cannold's vivid (and obviously well-researched) depictions of herbs, artifacts and day-to-day humdrum, came the various secretions and sensations; defecation and its derivatives are repeatedly dealt with in unflinching detail, as are all the suppurations and oozes. All quite necessarily, because Rachael is a healer.

Cannold's take on female arousal, as you'd expect, contrasts anything you'd read by Moorcock, and not just because Moorcock is a barking mad provocateur. But the sex in The Book of Rachael is still every bit as graphic as anything in Behold The Man; all the tumescence and moistening and ejaculate is there, albeit in a different arrangement.

This is of course, all quite natural. Yet I still caught myself asking if the detail wasn't a bit much, perhaps even insufficiently lady-like; clearly my brain has been the host of a noxious double-standard.

(Further to this, I managed to read without a hitch, Teri Louise Kelly's biography American Blow Job over the same period – the tale of her time as a highly sexed young man in the US. You can probably imagine that I extend the same pornographic tolerance to Martin Amis, and you'd be right if you did).

And if it wasn't the sex, there were times when the discussion of iron-age pregnancy made me want jump forward to the now to find a hospital corridor to pace! (Although predictably, the Deuteronomy 22:28 treatment made me livid like any sane person).

But why would a reader want to react like this? I find consistency consoling, but beyond this, and beyond the issue of the obvious sexism, why would anyone, as a reader, want to be in possession of a character flaw that potentially jars them out of the narrative, robbing them of enjoyment? Insane!

Up until now, I didn't know this about myself; that I was host to some sub-pious, vestigial remnant of a puritan double-standard. I thought I was all on-board with female sexual expression in the arts, yet here I am, The Book of Rachael diagnosing part of my prefrontal cortex as uncooperative.

Now I know this, I'll try to get better. Rachael is a healer.

Anyway, I'm starting to make things about me, and this is supposed to be a book review. Let this self-indulgence on my part serve as recommendation to male readers; there's several reasons why it's important the book is authored for '...every woman still struggling for a place in history'.

It's one thing for men to say they're okay with the idea of a female take on the narrative, and another to value it as an experience.

Now, unless you've missed the culture wars of the last few decades (and perhaps the prequel known as The Entire History of Western Christianity) you'd have noticed in discussions of culture, that 'Judæo' often seems surgically attached to 'Christian'. You'd also have noticed it's often the 'Christian' attaching itself to the 'Judæo', and rarely the other way around.

Thankfully, 'Christian' isn't dominating The Book of Rachael. There's no kitsch, retro-active, Anglo-Saxon Euro-Christ with sheep in tow; cultural appropriation is wound back, the result being greater authenticity.
With the plight of the women of the text presented against a backdrop of the common sufferings of the time, overt feminism at the spearhead of the story's revolutionary movement comes across as intuitive. Indeed, the way the story tells it, it seems more plausible as a historical movement than much of the ad-hoc re-tellings that pass for mainstream, Christian historicity.

While Cannold's version could stand well enough on its own merits, the origin of the real-world, mainstream, patriarchal narrative is given it's own fictional depiction - credibly fleshed out in cynical, thuggish, tragic opportunism. More conservative types may balk, or be offended, but that'd probably only speak to the merits of the book.

That The Book of Rachael manages all of this (and more) in lucid, descriptive prose, while maintaining pace and consistency, is quite a feat. Tension is maintained throughout the book through the well timed, yet uncontrived use of ever-looming, threats.

There's really only one issue on which I can find fault, and that's if you pick up on the thrust of the narrative, then the going-ons in the final chapters can broadcast themselves in advance just a little. In part this seems due to familiarity (being historical fiction) but also because even if not overly didactic about it, it seems clear the book has a mission. The end flows naturally from what goes before - almost obviously so.

Mind you, I note this perceived fault mostly out of a need for due diligence. I'm not so sure it's avoidable, nor not a product of the many merits of the text. Much less did this apparent flaw detract from my appreciation of said merits; these being many and sound.

This 'flaw' is just my focus on part of my own perspective, so even if you do accept my take on things there's still a lot more to the story - including several important divergences from the main events of the plot. You just can't be bored by this book.

It's essential reading, especially for us guys. So just lay back, open the book, and respect that Rachael knows what she's doing.