eBook Review - His Name in Lights by Patty Jansen 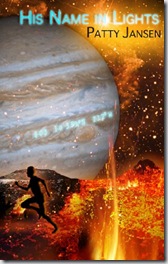 His Name In Lights is a hard SF novelette by Australian Writer Patty Jansen.  Now don’t let the tag ‘hard SF’ scare you off, there’s no Astrophysics or hard science to turn you brains to mush.  It’s hard science in the background, in the setting.

Allion Aerospace Ltd. has been contracted by the ISF(International Space Force) to carry out construction work on the volatile surface of Io (one of Jupiter’s moons).  Owing to the dangerous environment Allion have sent two of their aggregates(advanced human machine hybrids), who operate without the need for space suits.

Meanwhile, the Allion ship Thor III is lacing the cloud bands of Jupiter with balloons(hydrogen filled and with remote controlled lights) as part of the solar systems greatest bill board display.

Io being the hazardous environment that it is, causes problems and  a mayday signal is sent from one of the aggregates, the Thor III can’t reach them and  the  ISF grudgingly responds, but things are not as they seem and what started out as a simple tale of construction and human fancy in the outer solar system becomes one of intrigue, danger and surprisingly love.

Plausibility is the name of the game

As a I mentioned above, those of you who aren’t Scifi fans or prefer Star Wars to 2001: A Space Odyssey will find His Name in Lights an accessible story.  Jansen does a wonderful job of presenting a plausible setting and plausible technologies (and this is where it deserves the Hard SciFi tag).

I was hooked by the little background details that Jansen sprinkles throughout the text – The Mars war, the tension between pro human ISF and Allion, the political situation this side of the asteroid belt, the briefly mentioned technologies for dealing with space radiation on a huge scale.

Jansen has managed to give the reader a nice self contained story, and at the same time left us with a vision of a much larger ‘universe’- one that I want to read more stories set in.

Five stars from me, Patty’s just scored herself a fan.

You can read more about Patty at her blog

You can purchase her work through Amazon and Smashwords