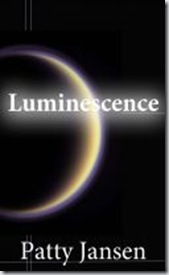 Luminescence is another novelette from Australian author Patty Jansen.  Set in the same universe (though at a different time) as His Name in lights .

I’ll just repeat the synopsis, because let’s face it if I spend more than a paragraph describing it there’s almost no point reading:

While diving in the methane lakes on Titan's south pole, Hadie's fiancée is struck by mysterious 'lightning' from a glass sphere. Hadie, a construct, artificial human, battles prejudice and hostility to help him recover, and discovers the truth behind the spheres.

In the two novelettes of Jansen’s I have read, humanity (and its various iterations) is stilled confined to the solar system but has developed in different, interesting and plausible ways.  I like the setting Jansen has crafted and hope(pine?) for a longer work.

Good sci-fi or sci-fi that I find good is that which asks questions of us, comments on problems and situations occurring now, even if this questioning achieved through the detachment of viewing a future situation.

In that sense I can see Luminescence could have been applied to examining the issue of mixed race relations in the 60’s, or indeed to gay marriage issues in the present. Questions about what makes us human and what rights should we expect as humans are touched on in this piece.

Even better Sci-Fi does the above without making us feeling like we are being asked to examine an issue.  I think Jansen does this, and it’s what marks her out as a cut above.

I will be upfront about it.  I am becoming a bit of a fan of Patty’s work, and as mentioned I long for her to put out some longer works set in this universe. That’s the only thing I can think of really, that this story could have been expanded into a novel(easy said when I don’t have to write it)I think that there’s enough material there.

But I'll be happy for her to continue giving the reader tantalising glimpses.

And at a dollar a pop this is great value entertainment.