Poems - The collected poetry of Iain Banks and Ken MacLeod 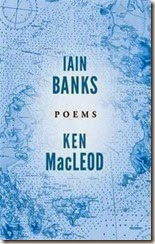 It’s rare that my two major literary interests intersect in such a spectacular way i.e. poetry and speculative fiction.  But here we have it, a collection of poems by the late Iain Banks and friend and fellow speculative fiction writer Ken MacLeod.

Here’s the official description of Poems:

Iain Banks the literary novelist and Iain M. Banks the science fiction writer are too well known to need introduction, but Iain Banks the poet has hitherto been almost undetected: a single poem was published in a magazine and three short pieces within the novels. But he took his poetry seriously and worked on it carefully, though he shared the results mainly with friends.

Readers of Iain's novels will find in these poems many aspects of his writing with which they're already familiar: a humane and materialist sensibility, an unflinching stare at the damage people can do to each other, a warm appreciation of the joy they can give to each other, a revel in language, a geologically informed gaze on land and sea, a continued meditation on what it means for us to be mortal embodied minds with a fleeting but consequent existence between abysses of deep time. Ken MacLeod, Iain's long-time friend and collaborator, has collected his poems according to his wishes, and they are published here - most for the first time - alongside a selection of Ken's own poetry.

The Guardian newspaper featured one of Iain’s poems here.

Booktopia has the hardcover available for pre-order. Release date is the 24th of Feb.