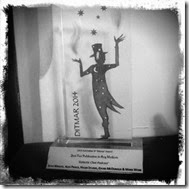 Well the preliminary one anyway ( for checking by members of the community for errors etc).  I am very pleased to see a number of folks featuring. Congratulations to all the nominees.

I have read and reviewed three of these and an argument could be made that they are all equally good at doing something different.  Such versatility.

I have read all but one of these but will leave commenting until after the Aurealis Awards. Sufficed to say another strong field

A tough selection here.  My advice, buy all of them :) and decide for yourself :D

I won’t comment here for obvious reasons.  But thanks to all who nominated me.  That’s a good cross section of commentary though I would have put Ian Mond in there somewhere too perhaps.

I will have to peruse some links for these.

Best Fan Publication in Any Medium

All bright and shining lights who are going to make my vote difficult.

My thinking on the Atheling is that it should probably go to a particular project of criticism to differentiate it from general fan writing or reviewing. So my choices will be between The Eddings Reread, Tansy’s article and FictionMachine.