eBook Review - The Best Science Fiction and Fantasy of the Year Volume 8. 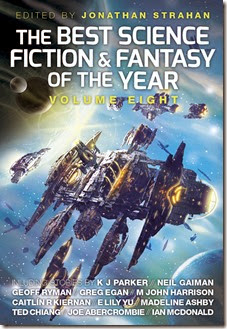 I tried last year subscribing to a number of online Science Fiction and Fantasy magazines in a vain attempt to try and get a handle on the field in its short form.  I still have a digital pile of unread magazines that I probably won’t make it to, what with being a reviewer, producer and a creative myself.

That’s one reason why I find works like The Best Science Fiction and Fantasy of the Year Volume 8 handy.  It’s a curated volume of some of the best works of the year, in the field.  For sure it’s Jonathan Strahan’s idea of what’s best and he’ll naturally have a different idea to other long running editors but I personally have found this particular volume to provide ample comfort, challenge and diversity.

There are works that are simply enjoyable and what we expect from well known authors; Abercrombie’s story Some Desperado featuring Shy from his Red Country novel and Gaiman’s off kilter fairytale, The Sleeper and the Spindle jump to mind.

Not having read any Greg Egan before I was delighted to find Zero for Conduct engaging, accessible and in line with the growing trend to present gender and cultural diversity. Prior to this story I had an impression that Egan might be a little too “hard science” for my tastes, but if he has longer work in the same vein as this short, I’d gladly read more.

M. John Harrison’s Cave and Julia, created a sense of enjoyable unease, and probably deserves a second reading because I got lost in his prose the first time.  If your are the kind of reader that thinks Science Fiction is all about ray guns and rocket ships then you might check out Harrison’s work to witness some stylistic diversity.

Ramez Naam’s work Water, is one of my favourites, a story that takes current trends and extrapolates.  You get an interesting and believable concept taken to its logical conclusion and in turn are obliquely encouraged to reflect on the present.

Ted Chiang achieves something similar with The Truth of Fact, the Truth of Feeling, where he presents the scenario of a society where we are able to record and recall almost instantaneously every waking moment.  He explores the ramifications of such through the narrator , a journalist who is exploring the use of such technology himself while at the same time presenting a parallel story of the effect the introduction of English writing and written technology on an oral culture.

Both Naam and Chiang give you stories that keep you thinking long after the story has ended.

Priya Sharma’s Rag and Bone, turns us away from science fiction toward a distinctly Dickensian Weird.  This tale has a nice twist to it which I think elevates it from being just another, albeit very well realised and written, outgrowth of Steampunk/Alternate Victorian genre meshed with the weird.  This story makes me want to track down more of Sharma’s work.

The inclusion of Charlie Jane Anders The Master Conjurer, is proof that writers of Speculative Fiction have a wicked sense of humour and works to bring some levity and offers contrast with some of the darker or serious works.

I am pleased to see Benjanun Sriduangkaew’s Fade to Gold included.  Sriduangkaew is one of the only short fiction writers I have managed to keep track of in the past year.  A fan of her science fiction, I was pleasantly surprised to see a work here, fantastical in nature, riffing off (what I assume) is Thai folklore, I was instantly reminded of some of the work Paolo Chikiamco collected in his anthology of Philippine Fantasy, Alternative Alamat.

The goodness continues with a Kiernan, an Ashby and an Ian Macdonald to name but three.  I tip my hat to Strahan (and to the writers he’s selected) because he’s presented a good representation of the field, he’s made me feel comfortable with the inclusion of works that fall in line with my tastes and presented works that showcase other parts of the genre, even authors I am not familiar with.  I get a sense that there’s a certain forward momentum with what he’s presented.

There’s enough material out there I’d say, to give a readership an entire collection of works not much different to an anthology collected a decade ago.  But the genre is moving on, with sub communities launching their own generation ships off in different directions, some boldly exploring the new, others staying a course.  Its nigh impossible to hold a full picture of everything contained within the Speculative Fiction universe but I think Strahan like a wizened navigator, can and has, presented us with an excellent guide.

This review copy was based on an electronic Arc provided by Solaris.

Readers can purchase a copy of from Booktopia or if you are quick you might be able to enter into a draw to win a copy here.