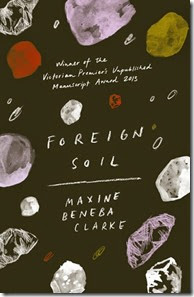 I came across Maxine Beneba Clarke quite by chance earlier in the year when I listened to her read the short story, Harlem Jones, (which appears in this collection) for the Overland Podcast.  From there I picked up one of her poetry collections from Picaro Press, nothing here needs fixing, which as you can read from the review, I was quite enamoured of.

Reading between the lines, I sense that Foreign Soil could easily not have made it into its current form.  Indeed Clarke tips her hat to the Victorian Premiers Unpublished Manuscript Award judges for being instrumental in securing this book a publisher.  Putting aside the fact that publishing is somewhat more akin to water divining than science when it comes to picking books that are going to break even let alone sell well, I scratch my head as to why you’d not see the quality of the work contained herein.

No waxing lyrical, no reaching for big words that I have forgotten since my brush with literary criticism at uni - these are just plain good stories.  In The Sukiyaki Book Club, the final story in the collection, we are treated to a parallel narrative; a fiction story that Maxine is creating and a autobiographical recount. In part of that recount we are presented with some of the rejections that Clarke has received.  I assume that autobiographical recount is sufficiently factual (though you can never tell with writers) and that some of the rejection letters pertain to the works contained in the collection.  They make for interesting reading, where interesting is scratching your head and wondering if they(the editors) read the same work as you did.

There wasn’t a story in this collection that I didn’t connect with.  I wonder if I need to type this twice, because there’s some indication that certain editors felt there would be problems with the public engaging with characters, language or themes.  I, the reader and Clarke the author, have vastly different life experience, but her skill as a storyteller makes that difference irrelevant.

If you can’t connect with this book, then the problem isn’t in the book.

The majority of the characters in these stories are people of colour and the settings range from the West Indies, to England and Australia. The are number of Englishes presented, which might present a problem for some ( personally I find Scottish English harder to understand than Jamaican and really, if you can be bothered to put a smidge of effort in to get “your ear in” so to speak, well…) but on the whole the collection is presented in Standard AU/UK English prose.

I enjoyed every story in the collection but some were real standouts.  Shu Yi really got to me, not only because it was a well structured story with a gutting ending, but because it rang true with much of my personal school experience, both as a student and a teacher. For readers of speculative fiction a couple of these stories delivered the same sort of emotional gut punch you’d get with reading something like Margo Lanagan’s Singing my Sister Down and Railton Road is certainly one of those. Set in Brixton, an area that later became famous for the Brixton Riots of 1981, it tells a story of a group of black activists engaged in the enlightenment of black British youth.  It’s one of those stories that builds tension well, that generates a sense of foreboding, and compels you toward an end that you know is coming but that you don’t really want to see, nor accept as happening. The aftermath of this story, the complexity inherent in race tensions still sits with me long after having finished it

Gaps in the Hickory is possibly my favourite and for a number of reasons.  It’s a longer piece, indeed at 52 pages I think it ties with The Stilt Fishermen of Kathaluwa as the collection’s longest and as such it has more time to immerse you in the story.  I think that I might have enjoyed a novella with these characters or even a novel. I like that it presents another English, a Mississippi dialect if you will, used by southern white folk that’s every bit as non standard as the Jamaican English that’s presented  previously in Hope.  I like that Clarke has chosen to present a number of stories in different Englishes and that her editors have gone with it.  It’s another tool that works to get the reader firmly bedded down in a place that (in my case) is different to what they have experienced. There’s some subtle misdirection in this story too that works very well, but enough said about that.

Reading should be about expanding your experience as a reader (at least some of the time) and I feel that this story in particular did that.  Clarke has that knack of taking characters who you share nothing in common with (at least on the surface) and making you care desperately about them.

The Stilt Fishermen of Kathaluwa, hits closer to home being the story of a “Boat Person”, an asylum seeker.  If we could just let 60% of Australians stumble across this story, then perhaps we might chip away at the two dimensional, goodies versus baddies approach to Asylum seekers this country seems determine to take.  It captures beautifully and tragically the realities of lives caught up in the situation.  The desperation of those seeking asylum, the impotence experienced by those who dedicate their life to helping others and the negligence of the silent, wilfully ignorant, majority of Australians who just don’t want to know - and all that without preaching.

We need more writers like Maxine Beneba Clarke, not just because she’s a woman, or a person of colour but because she tells a damn fine story, and likely not one we’ve heard before.

Foreign Soil is released on the 29th of April, you should be able to get it from all good bricks and mortar bookstores and online as well.