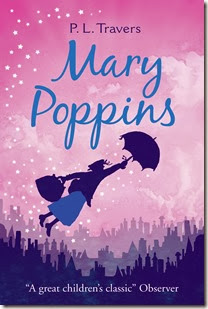 I didn’t realise that PL Travers was born in Australia until came across a Bronze statue of Mary Poppins erected outside the bank building where she was born in Maryborough, Queensland around 2008.  I had also only ever seen the Disney musical staring Julie Andrews.  So this year I resolved to read this classic for the Australian Women Writers challenge.  I think it also fits nicely under this blog’s purview as a work of fantasy.

IF YOU WANT to find Cherry Tree Lane all you have to do is ask the Policeman at the crossroads. He will push his helmet slightly to one side, scratch his head thoughtfully, and then he will point his huge white-gloved finger and say:“First to your right, second to your left, sharp right again, and you’re there. Good morning.”

So starts Mary Poppins.  There’s something very comforting about this beginning and strikes me as very similar to the beginning of the Hobbit.  Simple comforting and yet also expressive of the type of tale that is to follow.

For those of you bought up on the Disney version as I was, I found that there was less of a narrative drive in the book than in the movie.  The later uses several scenes or set pieces from the book, but overall I found the novel to be more of a collection of linked short stories.  Mary Poppins is broken into 12 more or less self contained chapters, ideal I would think for facilitating reading to young children at bedtime and convenient breaking points for older readers trying to build their reading muscles.

Which isn’t to say that there’s nothing here for the adult reader whether your reading it to your children or for your own pleasure.  Brian Sibley (another Tolkien connection) quotes Travers in his afterword:

“Nobody writes for children really,” she’d say. “You’re writing to make yourself laugh, or yourself cry; if you write for children, you’ve lost them.”

So in the tradition of good stories everywhere Mary Poppins contains some wry observations of the adult world and British society, the relationships of men and women and perhaps even some stoic philosophy in the form of quips from Mary like this:

“Trouble trouble and it will trouble you!” retorted Mary Poppins crossly, in her usual voice.

I do wonder if children in the 21st Century, fed on a diet of high resolution video games might yawn if given Mary Poppins to read.  I think that would be sad if it was the case.  It’s a novel ( a proppa’ book in other words) where the world can still be turned on its head and some of the adults are involved in the fantasy.  We have people stepping into paintings, cows jumping over the moon, talking animals and allusions to myth.

If you are a fan of the movie I think you will find the most difference in the character of Mary.  In the movie Mary is stern, but with Julie Andrews singing Sherman Brothers tunes the character comes across as having a heart of gold under a thin veneer of propriety.  I found the Mary of the novel more enigmatic, than anything.  She is stern and cross at times and uses withering stares that had the misfortune of making me think of Julie Bishop. She is also a little vain, as Travers mentions her stopping a number of times to admire herself and her clothing in shop windows.

And though I didn’t find it “unputdownable”, with the West wind blowing I felt as sense of sadness as I closed the book.

A number of editions of Mary Poppins and subsequent tales featuring the Banks Children can be purchased from Booktopia.